No 'Secret' it was a hit 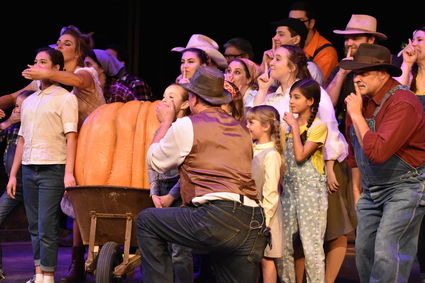 Larry Starrh's newest production, "The Big Secret," took center stage at the Shafter Colours Festival and drew sellouts for the tale of a poor farmer and his family.

The play was full of lively music that paired up with the story that made you think as well as enjoy the acting and music.

The production was directed by Brent Starrh. Starrh has a bachelor's degree in theater arts from Westmont College and put his knowledge to good use with a play that blended intricate musical numbers with some deep dialogue that satisfied the audience, in an evening filled with applause and laughter.

The story is of a dirt poor farmer, Lester, played by Larry Starrh. Lester has a daughter, Mary, played by Ashleigh Janzen, who is in love with a missionary that lives at the labor camp in the area. The missionary, Dwight, was performed by Jason Gauthier. Janzen and Gauthier had great chemistry and gave the story a boost with a couple of lovely songs.

Starrh made the statement in the production that all families have secrets, and that some are bigger than others, that affect those who you love.

Lester is in cahoots with the local farrier, Manny, who was played hilariously by Dan Carrion, as partners to beat the Paul and Philo, a couple of brothers who have won the Biggest Pumpkin Award at the county fair for the past three years. The brothers were played by Ted Wiedmann and Brian Crawford, who both drew some of the biggest laughs of the night.

Lester's wife, Ella Mae, was played by Bethany Rowlee, who played four different characters in Starrh's play last year at the Colours Festival. In this production, she had just one character, but still showed such a range of emotions that it showed her chops as an actor.

Another highlight of the night was the energy and aplomb of the youngest major player in the production, Chloe Boozer, who played Ruth, a child of the labor camp who comes to stay for a short time with Lester and his family. Boozer showed a maturity beyond her years with featured song as well as a big part of dialogue. 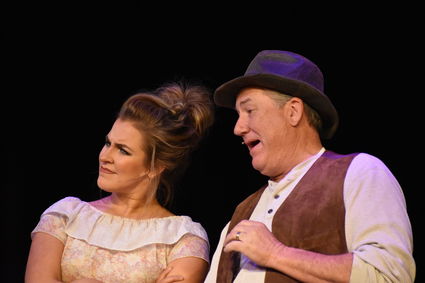 At first, you think that the "Big Secret" is the scheme to grab the title at the county fair from Phil and Philo. That is until Starrh surprises you with a twist that is reminiscent of "The Sixth Sense."

Ella Mae is actually dead and appears to only Lester, giving him advice and trying to convince Lester to tell their daughter the truth about her death. He had told everyone, including Mary, that his beloved wife died of a heart problem. The truth, the "Big Secret," is that she committed suicide.

Toward the end of the play, Lester finally takes his wife's advice and tells his daughter the truth.

Lester realizes that the secret did nothing but keep him from moving on. The production was accompanied by a live band that included Brian Boozer, Chyna Charbonneau, Wynston Hamann, Caleb Privett and Michelle Starrh. They added another layer to the production that it wouldn't have had with a soundtrack.