Winter is cool for SHS 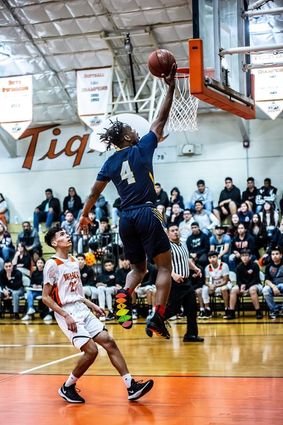 Gabriel Iruh goes up for two.

After receiving a bye in the first round, the Generals, seeded No. 3 in the tournament, beat sixth- seeded Lindsay, 4-3, to reach the semifinals. In that game, Shafter went up against a Woodlake team that had upset second-seeded Chowchilla. The Generals had no trouble in dispatching the Tigers, shutting them out 4-0.

The Shafter players were a bundle of nerves as they started off the championship game against Garces. They also were hit with an early questionable penalty call, giving the Rams a penalty kick, which they converted into a 1-0 lead. The game continued to go downhill from there, as the Generals could never get on track, dropping the game, 4-0. They still had an successful season that propelled them into the title game for the first time in several years.

On the girls' side, the Lady Generals came in seeded No. 5 in Division V. Shafter opened their quest for a title with a 6-0 pounding of the Horned Toads of Coalinga High School. They then played the fourth seed, Roosevelt High School from Fresno. The Lady Generals played a tough match, but could not overcome a halftime deficit and dropped the game, 2-1. The season saw the Lady Generals dominate opponents in the SSL, especially on the defensive side of the ball, giving them an opportunity to score on offense.

On the basketball court, the boys varsity basketball team came into the Valley Tournament seeded No. 9 in Division III. They opened against the Mustangs of Tulare Western, the No. 8 seed. After playing them even for the first half, the host Mustangs were able to pull away in the second, ending the Generals' season, 68-49. The Generals finished 21-8 overall, with an 8-2 record in the SSL. With six juniors returning next year, it odds are good for a return trip to the post-season next year for the Generals. 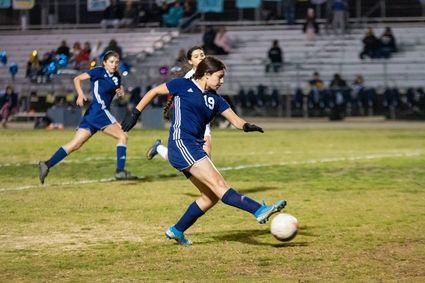 The Lady Generals basketball team, because of their success in recent years, were competing in the more competitive Division II, requiring them to face schools with more numbers than they have, but Shafter showed its competitiveness and the reason that they belong in that division. The Lady Generals came into the tournament seeded No. 13 and had to face fourth-seeded Nipomo in the opening round. Shafter went toe-to-toe with the host team on the coast and came out on top with a 46-42 victory. They then faced the No. 5 seeded Selma Bears. The Lady Generals used their quickness on defense and the outstanding play of Monica Birruetta on offense to keep the game close. Ultimately, the Lady Bears managed to pull out a 10-point victory, ending the Lady Generals' season, 67-57.

The Lady Generals overall record was barely .500 but didn't reflect their talent level because they played such a difficult nonconference schedule, going up against a lot of teams a division or two higher than them.

In SSL play, the Lady Generals ended the year with a share of the league title at 9-2.