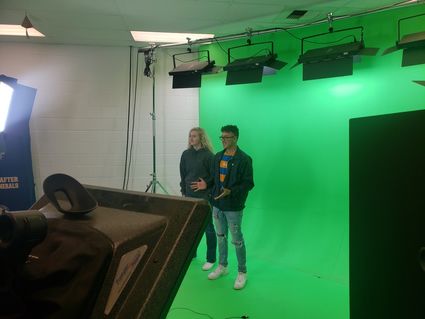 "HQTV" team recording the daily show in front of their green screen.

Shafter High School has housed a high-tech studio lab on campus for six years. In the technology studio, students have the opportunity to take Video Production, Broadcast Journalism and Video Game Design.

The Video Production course is a chance for students to learn all the components that go into making a film from how to use professional cameras, writing scripts, acting and directing, and the editing software to put all the finishing touches on the film. The students study films in class and then work together in groups to create their own film based on components they learned from watching master films.

They begin with the basics of how to point and click the camera and edit each shot to make smooth transitions between scenes. Students quickly learn it takes a lot of time and effort to make a film. By the end of the year, students will create an original 15-minute film. The students in this course also participate in a short film festival. They get 48 hours and specific criteria to create a 5-6 minute film. The films are played in a real theater and judged in different categories.

In the Broadcast Journalism course, students use industry technology to create live productions. The students put on a daily show, "HQTV," to highlight the events going on around campus with a unique and tailored approach. The technology the students learn to use in this course are exactly what they will encounter in a real newsroom. Because of the technology available, students film many live events, such as plays, music programs, sporting events and assemblies.

This year, the course will also highlight live eSports events. Once learning the technology for live productions, students have an opportunity to take a certification to become a tricaster and get a job right on the spot. 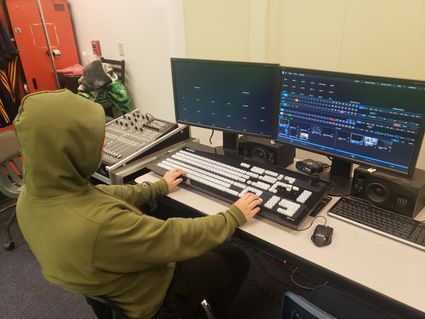 A student working on the video editing software.

Video Game Design is a fun opportunity for students to learn how to make their own video games. The course begins by teaching students the basics of coding and how to work with different elements that go into a video game. They start by making linear 2D games such as Pong, then progress to a more interactive game like Asteroids. As the course continues, students learn how to create characters, sounds, and backdrops. The capstone activity is making their own video game.

The teacher of this program, Jerald Pierucci, was excited to bring these courses to Shafter High School and has continued to grow the program. His hope for students is to love what they are learning and apply it to a future career. More specifically, he wants his students in Video Game Design "to learn to love coding"; his students in Video Production "to understand all that goes into films and spark an interest to continue learning on a higher level"; and for his live broadcasting class "to develop the skills to speak in front of people and show confidence on camera." Overall, Pierucci wants all of his students to learn something that they can take beyond the classroom and be successful in any career they choose.