Champions in their own tournament 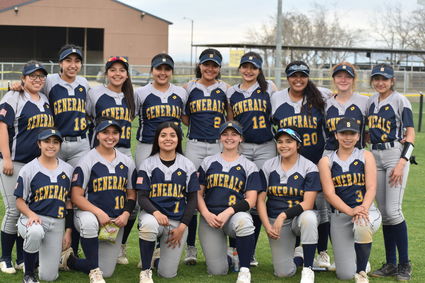 The Lady Generals won the championship in their first tournament of the season.

The Shafter High Lady Generals softball team opened their season with a tournament championship on their own turf, defeating the Chavez Titans in the Shafter Slugfest's title game, 8-3.

The tournament, held Wednesday through Saturday last week, attracted eight teams divided into two pools, playing a round-robin system, with each team facing the other three teams in their pool. The top team in each pool played for the championship.

The Lady Generals were joined in their pool by West High, McFarland and Bakersfield High School. The other pool consisted of Arvin, Wasco, Chavez and North High. Shafter opened with a 15-0 win against the Vikings of West High. Nataly Espinoza pitched the shutout for the Lady Generals, while the offense pounded out over 20 hits for the game.

In the second game, the locals beat the Lady Drillers of BHS, 11-3. In their final pool play game, Shafter pitched another shutout, beating McFarland, 20-0. The Lady Generals showed their depth as they used four different pitchers in the tournament. In addition to Espinoza and Serenity Angula, they also used Mia Ortiz and Katrina Trejo on the mound.

Chavez made it to the title game with victories over North High, 9-1, then by beating fellow SSL opponents Wasco, 10-7, and Arvin, 11-3.

In the title game, the Lady Generals jumped out to a 5-0 lead after four innings, pounding out eight hits in the first few innings. Junior short stop Alicia Pompa smacked the Lady Generals' first homer of the season by connecting with a 2-1 pitch that sailed over the left center fence, stretching their lead to 6-0.

After widening the lead to 8-0, the Titans managed to produce three runs in the fifth inning, cutting the lead to 8-3. Serenity Angulo, a freshman, stepped on the mound and finished the game by shutting them down, allowing the Lady Generals to capture the title. 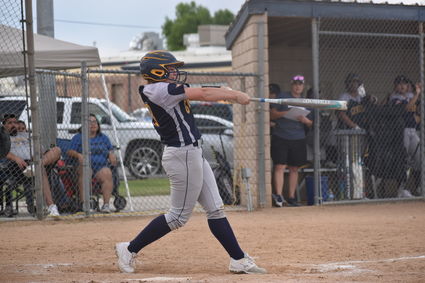 Alicia Pompa connects for Shafter's first homer of the season.

This year's squad only has three seniors on it, with the majority of the players in their junior year. They event had three freshmen on the field for the title game. Led by Head Coach Julia Garcia and her staff, this year's team is on track for a successful season, already beating one of their main obstacles in the SSL, Chavez. They will be meeting the Titans again on Tuesday, March 17, in SSL play. The Lady Generals will be in action on Friday, March 13, when they take on San Joaquin Memorial in their opening game of the Madera South Showdown tourney in Madera.

There was also a junior varsity tournament at the complex, and the Shafter Lady Generals JV team came away with a second-place finish. Shafter beat West High 17-4 and Bakersfield High 23-3 before closing out pool play with a 13-3 win against the Stars of North High School. The Frontier Titans went undefeated in their pool to meet the Lady Generals in the championship game. The Titans scored 11 runs in the first two innings to build what would be an insurmountable lead as they cruised to a 15-3 win over the Lady Gener