Jess Lopez looks at a picture of himself in uniform.

After seeing the world, a Wasco soldier chose to return to Wasco.

Born in October of 1921, Jess Lopez grew up in Wyoming. He was only educated until the third grade because his father needed his help working in the fields in order to provide for the family.

"At 19 years old, I joined the United States Army," he said. "That's when I became an American citizen."

Lopez said his fondest memory of that time was looking at the Golden Gate Bridge as they sailed to Japan. "It took us 25 days to arrive."

Overall, Lopez appreciated his military experience. He enjoyed meeting people and the experience showed him that life wasn't so simple. "I realized freedom isn't given, it's earned," he said.

One of his brothers, brother, Alfonso, died as a result of a war injury while also serving overseas. 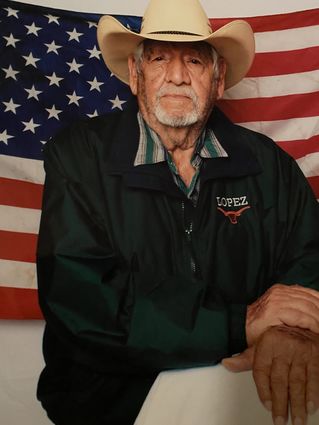 Upon leaving the Army, Lopez returned to California and lived in Greenfield with his family. He drove a truck for several years and received his first farm labor contracting license in 1954.

Lopez's family moved to Wasco in 1958, and he has considered Wasco his home ever since.

Retired for several years, Lopez shared that he is "most proud of my family, and of the great men and women they have all become."

He gives his parents credit for instilling in him the values of hard work and family. "It helped me become successful in my farm labor contracting business. But, most of all, I am extremely proud to be a United States Army veteran and to have had the opportunity to serve my country as an American citizen."