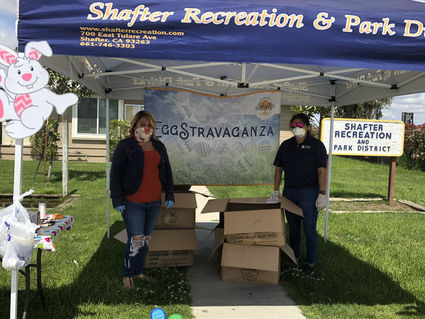 The Shafter Recreation Department gave the families of Shafter a chance to celebrate the holiday even from the safety of their own homes last Friday with a Quarantine Egg Quest.

On Friday, families drove by the Recreation Office on East Tulare Avenue, and District Manager Phillip Jimenez and his staff handed out 6,000 eggs filled with toys and candy.

The participants then took the eggs home to hold their own egg hunts. The only rules were to hold the egg hunt at their homes, post pictures and videos on social media, and tag the Recreation Department with them. Those who followed the guidelines were entered into a drawing that was held on Monday.

Entrants watched on Facebook Live as names were drawn for three prizes. Stacy Munoz won a $25 Subway gift card and Ruben Jimenez won a certificate for $40 from the Generals Headquarters. They then drew Mary Echirebel's name as the winner of a new bike.

"There were so many kids disappointed that we were not able to hold our annual Egg Hunt at the Recreation Department. So, we decided to make sure to give them a different way to celebrate," Jimenez said.

"The children are already bummed being away from their friends with school being out for a couple of weeks already, and them not being able to go play with them or even visit. So, I thought that this would give them a chance have a little fun and do it safely."

Cars started lining up before noon for the event, which was scheduled to begin at 1 p.m. With the large number of vehicles already in place, Jimenez and crew started handing the eggs out and were out of eggs in less than an hour. 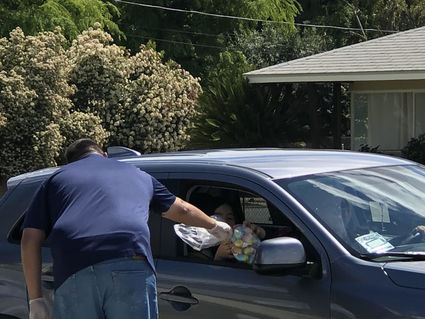 Phillip Jimenez gives out eggs to families to hunt at home.

Jimenez and staff followed all of the safety protocols put in place by the county, with the crew wearing masks and gloves when handing the eggs out.

Families had fun hunting the eggs at home, and several of the participants posted their hunts on the Recreation's Instagram and Facebook.

"I think this was such a great idea, and our kids had a blast. They were afraid this was going to be a boring Easter, but it turned out great," said Laura Montez, whose two children, Andre and

Jimenez said that he got the idea from the North of the River Recreation Department, which held a similar egg hunt in two locations. He said the Shafter event turned out so well that they might think about holding another virtual hunt next year.