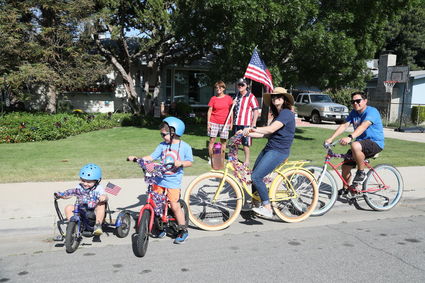 The Corrales family pay Papa and Grandma Edgmon a visit.

Shafter has celebrated May as Shafter Strong month, with different themes each week, including drawing thank you's in chalk to our First Responders one week and lighting up the night last week, with houses bathed in red, white and blue lights during Light the Night Week.

This week, the month was finished up with residents decorating their cars, bicycles and themselves in patriotic colors, showing off their patriotism and city pride.

A large number of people hit the streets decked out in red, white and blue, with others snapping photos and posting them online. 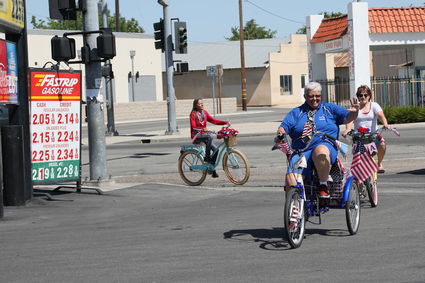 Nancy Spiva, Sandi Brown and Terri Hamilton are greeted by Kenny Smith as they stopped at Fastrip for some refreshments.

This project was the brainchild of local photographer Colleen Diltz, Captain Diana Burnett of the Shafter Police Department, the Shafter Chamber's Debbie Haley and a few other community members who were looking for a way to unite the city as residents had to keep our distance.

"This project was a great way to bring us together and create a real community attitude in this time," said Diltz.

One family seen displaying their community pride and patriotism was the Corrales family, who rode their bikes to Ed (Papa) and Lonnie (Grandma) Edgmon's house. Grandma Lonnie gave Ethan and Joaquin one of their favorite treats, M&Ms. She gave Ethan some yellow ones, his favorite.

Another group participating in the project was Terri Hamilton, Nancy Spiva and Sandi Brown, who were tooling around on their bicycles, decked out in patriotic colors. They were greeted by Kenny Smith at Fastrip as they were stopping for refreshments. They also commented that people took time to stop and take pictures of them, as well as them getting a lot of waves and horns honking in support.