Focus on Local Business: La Canasta is open and well-stocked

'Some of the best food you'll ever try' 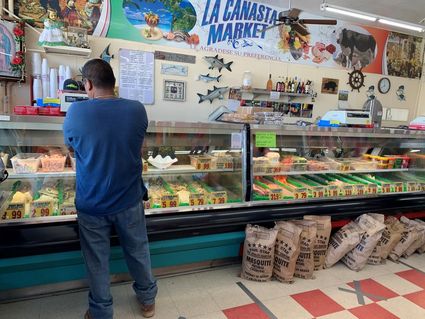 A customer waits for the clerk to take his order.

La Canasta Market, at 1017 7th Street, has been around for 33 years and continues to serve the community during the coronavirus restrictions.

Maria Paz has owned the market since 1987. Two of her sons and her granddaughter, Byanka Valenzuela, work in the store with her.

When many larger stores ran out of items that were highly sought because of the pandemic, "people came in here" to buy them, Valenzuela said.

Maria Paz spoke through interpreter Orquidea Ocampo, who had her own praise for the market.

"I come in here a lot for their shrimp cocktail," Ocampo said. "It's the best I've ever tasted."

Ocampo said the market also offers fresh crab cocktail. "This is where I usually buy my meat," he said. "It's mainly well-known for its seafood."

The market also sells meat and vegetables and offers a fresh fruit juice bar serving pineapple water, strawberry water and coconut water. The water is packed with fresh fruit, and "tastes so good on a hot day like today," Ocampo said.

Paz originally worked in the fields in Salinas before moving to Wasco. "I wanted to bring a piece of the Salinas Valley to Wasco," she said through Ocampo. "Grandpa loved seafood."

Paz has three grown children; two of her boys help her in running the store. 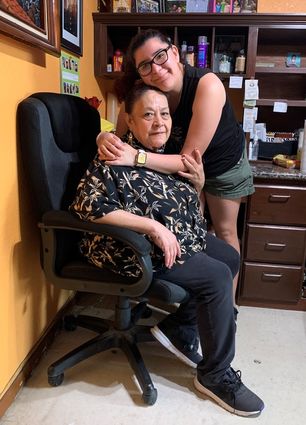 The owner of La Canasta Market, Maria Paz, with her granddaughter, Byanka Valenzuela.

Valenzuela said they then allowed only two customers in the store at the same time.

"The only time my store was closed was this past Tuesday when a fuse blew out, and we had to close the store to repair it," Valenzuela said.

La Canasta is open and even with social distancing restrictions, there's one very good reason to pay it a visit, the owner says.

"I make some of the best food you will ever try."