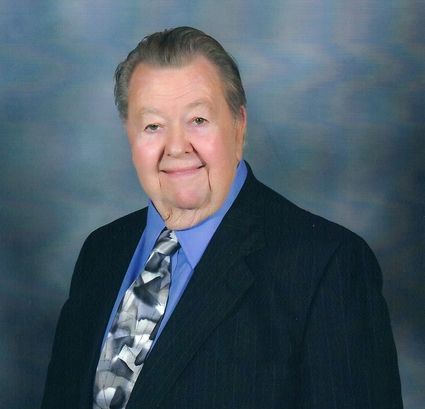 Frank Wallace "Wally" Reed, founding co-publisher of the Wasco Tribune and former co-publisher of The Shafter Press, died this week at 90 after a fall at his home. Several staff members of the paper worked with him and his family during the nearly half-century Reed Print owned the papers. Their thoughts are on Page 7; an obituary is on Page 8.

This story was on the last front page of one of his original papers, the Arvin Tiller, before it closed in on Dec. 6, 2017. The writer is a former Reed Print reporter and columnist, and president of the Arvin Historical Society.

Don Burkett and I often talk "newspaper" before church or after church. Don thinks he could be classified as columnists because we have our own columns in the Arvin Tiller and Lamont Reporter

My first column was in the late 1960s and early 70s in the Arvin Tiller.

I even had my picture in my column, "Look who's here." This covered Arvin's newborn babies.

This article is not about Don or me; it is about Frank Wallace "Wally" Reed, president and co-publisher of Reed Print Inc.

It was about 60 years ago when I went into the Arvin Tiller office on Main Street to talk to Wally about a job.

I was so excited when I turned in my first news articles. I remember well that Wally said, " I thought that I told you to double-space." I told him I had done that. He said, "Not across, but up and down. " I wasn't a typist, but he didn't run me off." Wally was born Jan. 8, 1930 to Frank and Val Reed of Chadron, Neb. The Reed family moved to Arvin in 1939. Wally started at the Arvin School, located on B Street, in the fifth grade.

Wally said their first home in Arvin was in the apartments in the alley between Tucker Street and Main Street behind the post office. I remember them living in a very pretty brick red house on Tucker Street close to Stockton Street.

Wally attended and graduated from the Kern Union High School District, currently Bakersfield High School. The Arvin kids were transported to and from school by bus. This was during the War.

It was impossible to take part in sports or after-school activities Wally gave it a try with sports, but it didn't work out. If you missed your bus, it was a long walk home.

In 1946, Wally took flying lessons on the dirt strip located on the east side of Weedpatch Highway. It didn't go through to Union Avenue until the late 40s or early 50s.

He received his pilot's license in March of 1968. He and Bill Frantovich were partners in a plane. When Steve's business had financial problems, he sold his partnership to Wally.

Wally shared many airplane stories with me, but I can't do them justice. I am going to ask Wally to write them all down for me.

Wally's head was mostly in the clouds until he met a pretty young girl from Taft named Janet. She was more interested in his friend Genene Buchanon. That didn't last long.

On a trip home from L.A. with a buddy, Wally decided to take a side trip to Taft to give one more try with Janet. A courtship began, and Jan and Wally were married Feb. 7, 1948.

Jan and Wally were blessed with four children – Bill, Don, Marta and Robert. Marta chose another path, with the U.S. Post Office.

Wally and Jan have traveled all over the U.S. in motor homes and travel trailers, as well as on many cruises.

Wally has been recognized by the Arvin Lions Club for his 70 years as a member. He was also one of the founders of the Arvin Bear Boosters' Club.

P.S. Jan and Wally met at Kern Park. Jan's family was on a picnic, and Wally and Gene Buchanon were out on a drive at the park. They met at the swimming pool.

He left a trail

He loved what he did and passed it on

I started for Reed Print in 1977. Through the years, I had many job titles, but I always enjoyed my years at Reed Print. Because I was in the Shafter office, I did not see Wally often, but on those rare occasions I can tell you, what I noticed right away was that he was the true newspaperman. As soon as you came into his office or in the back, where he was working on the inserter you immediately sensed he loved what he did and newspapers and printing were his life.

It is at Reed Print working for this family of newspaper entrepreneurs I gained my love for newsprint and small town papers. The news of his passing brought sadness as I realized the newspapermen who chartered the small town waters are slowly dwindling away and with them and the passage of time, we are losing some of our greatest assets in the world of journalism.

Thank you, Mr. Wally Reed, for allowing this young high school girl to see the world from your point of view.

He provided the opportunity to live the dream

I will always be grateful for Wally for giving me a chance to do something that I love to do. I dreamed most of my life about being a writer, and he and his family allowed me to do just that.

I remember Wally as one of a dying breed. He loved the newspaper and didn’t shy away from getting that story, no matter the consequences. We may not have agreed on a lot when it came to politics, or some other issues, but I always respected him and cared for him.

The backbone of the company he kept alive

I enjoyed working for Wally Reed when I returned to Reed Print in 2017 as the reporter for the Lamont Reporter and Arvin Tiller.

I left Reed Print in 2006 on good terms after a year working in Wasco and was rehired three weeks later by Wally’s son, Don Reed, to work in Arvin and Lamont instead of Wasco. I was grateful when Don rehired me. Working for Wally and Don were always pleasant experiences for me.

Wally was a hard worker and the backbone of the company he kept alive. Wally was always very friendly to me. I wanted me back at Reed Print desperately and waited over three years for the editor who replaced me in Arvin and Lamont to make a career move and open the door for me again.

I am sad to say goodbye to Wally Reed. I know Wally was well respected and well liked within the community because people told me how much they enjoyed working with him.

Wally, rest in peace. You will be remembered.

He gave a kid a chance

I was still in high school when Wally and his son Don purchased The Shafter Press. They both gave the kid who cleaned the office more responsibility than you’d expect, showing confidence based more on enthusiasm than experience.

Wally was a good businessman and solid newspaperman. Although my interactions with him were infrequent – like when I brought the press plates for the paper to be printed in Arvin – I could see him behind the scenes making sure the work got done, often doing the job himself, much like other family publishers at the time.

We hope we can continue to carry on the tradition that he began more than a half-century ago.