The classes of coronavirus 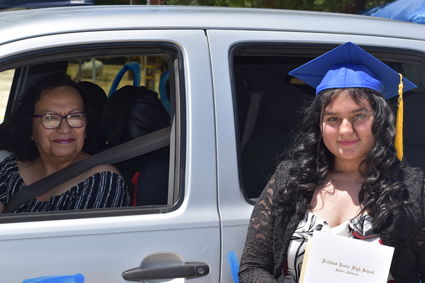 It may have been a different type of ceremony, but the result was the same.

Over 300 graduates from Richland Junior High made the transition from eighth-grade Trojans to Shafter High Generals last Friday with a special ceremony that was put on in the face of the restrictions in place because of the Covid-19 pandemic.

Facing the possibility of having to graduate 346 students with no celebration or ceremony at all, Interim Superintendent Rosa Romero and her administration at Richland Junior High came up with a special ceremony that adhered to state requirements, as well as honored those students who had successfully navigated their way through junior high.

The ceremony was an all-day affair, with the students going in different sessions through the bus lanes at Sequoia Elementary School.

According to Romero, there also will be a video posted of the different award winners, such as Tommy and Tammy Trojan, who receive special awards for their titles. This year, those titles went to Alexander Aguirre and Luna Obeso Gallegos. The video will include speeches from this year’s valedictorian, Kara Gonzales, and salutatorian, Laurel Franz. 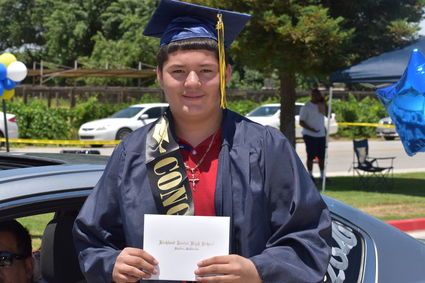 Other special award winners are Gustavo Pardo and Lilliana Oros, who were awarded the Kathy Mayes Character Counts Awards. Winners of the Ray Wiley Awards for this year were Jolesine Osuna and Keano Almager.

With the graduation ceremony a success, according to staff, students and parents, attention is now being set on what the classrooms are going to look like when fall comes.

Romero said that as of right now, it appears there will be a limit of 12-15 students per class, with those students practicing social distancing. Romero said that it is a possibility that they may have to begin the school year early and are facing the possibility of having an extra week during the Christmas break.

These possibilities are not certainties, as Romero said that there still will be plenty of meetings and decisions to be made before the school year arrives.