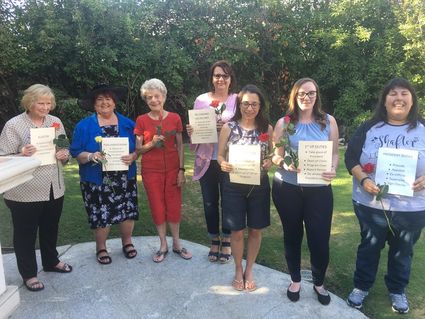 After a hiatus due to the coronavirus, the Shafter Woman's Club met on June 10 to install new officers. President Angie Nelson's theme, "Fostering Kindness," will guide the club for two years. Social distancing and masks were a part of the event.

The club received several awards in the past year for several different projects. In Cans d'Arte, the event that is held during the Colours Festival, the club received an State Art Award. They also received a State Award in Domestic Violence Awareness for their White Ribbon Campaign. Chair Judy Knox gave special thanks to the Depot Museum and Coulours for help with the Cans d'Arte event. 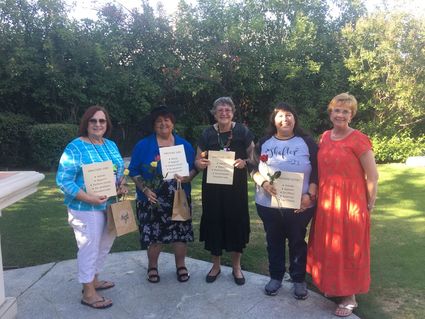 Chaired by Barbara Gladden and Colleen Diltz, the White Ribbon Campaign is a program that aims to prevent domestic violence. A presentation was made in front of the city council, as well as throughout town. The club also thanked Shafter High Principal Russell Shipley and Shafter High School for their support and the success of the program.

SWC's community programs have included scholarships, the Shafter Symphony, Shafter Clean-up, Stuff the Bus, Filled Purses for Victims of Abuse, the Christmas Store, little libraries, elementary art contests, the Heifer Project parade of costumes and Beautiful Shafter. They also send a sophomore from Shafter High School to the Hugh O'Brien Leadership Conference every year. The club sponsored their first DYW candidate this past year, as well as two girls athletic teams through Shafter Recreation and Parks.

Regular club activities will resume in August with a friend-raising event, assuming social gathering is possible at that time.