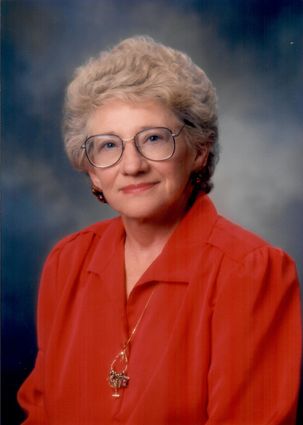 Marjorie Dell Siemens was born in Sterling, Okla., to Millard Hugo and Mable Ethel Myrick. She grew up in Shafter, attending Shafter schools and graduated from Shafter High School in 1949. As a child she was known to be very happy. Thus, she received the nickname of "Happy." All the nieces and nephews called her "Auntie Hap."

Marj met John E. Siemens in 1951 while serving at an ice cream parlor in Shafter where China Cuisine is currently located. They married June 2, 1951, in Las Vegas.

Marjorie worked various jobs in her lifetime. The last was owning Shirley's Dress Shop from 1969 until it closed in 1994. Not only was she the store owner, she was also the seamstress and no doubly completed hundreds if not thousands of alterations through the years.

Marjorie had three children, Gary Gene born in 1949, Pamela Kay born in 1952, and Jonathan Jay born in 1957. She was very involved in all the kids' activities, including Sunday School, 4H, FFA and a multitude of sports for all three kids.

She was a "farmers wife," always keeping busy and was rarely seen sitting still. It would be completely normal for her to occupy her time with sewing, canning, crafts, porcelain dolls, canvas oil paintings and gardening. She even took a washing machine repair class after my grandfather passed away saying, "I'm going to need to know how to repair things now that Dad is gone."

She was a member of the Shafter Historical Society and Shafter Chamber of Commerce. While president of the chamber, she even brought in Christopher Reeve (the "Superman" movie star) to help dedicate the historical site for the Gossamer Condor at Minter Field.

Marjorie loved all her family very much, and always told her kids how being connected to your family and God were the two most important aspects of life.

Funeral and committal services were conducted earlier this week, interment was at Shafter Memorial Park, with Pastor Pat Coyle officiating. We wish to thank the caregivers of Carrington Assisted Living and the team from Hofman Hospice.

In her memory, donations may be made to North Kern Christian School, 710 Peters St., Wasco 93280.