Wasco graduations were different – but safe

Quiet memories for Class of 2020 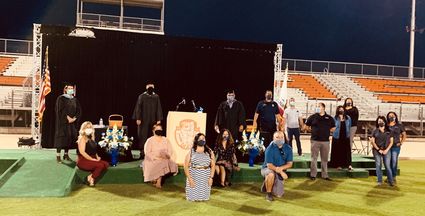 Despite the Covid-19 pandemic, Wasco High and Wasco Independence High were able to hold live graduation ceremonies, although they looked different than in years past.

In order to maintain social distancing, students were asked to follow a simple set of rules when stepping up to the podium to receive their diplomas. Only one administrator was at the podium at a time and did not shake graduates' hands when handing out diplomas.

Everyone on the field had a mask on except the person at the microphone.

School board members were strategically placed below the stage to be safely distanced.

Chairs were aligned in rows of three for the graduate and their two guests, with at least 6 feet apart between each row. Graduates did not throw their caps in the air upon dismissal, as they normally would enthusiastically. Instead, they walked off by row, silently.

The graduates of WIHS walked onto the field to "Pomp and Circumstance" playing over the loudspeaker, while WHS had recordings of the seniors from the Celebration of the Class of 2020 Facebook presentation playing. Several firecrackers went off during the ceremony.

Speeches by administrators addressed how the COVID-19 pandemic had affected students and commended them for their persistence in making it through their last year of high school under such unique and challenging conditions.

Superintendent Lori Albrecht addressed both graduating classes and praised retiring principal Martin Lonza for his 35 years of service to the district and 16 years at WIHS.

WIHS Principal Martin Lonza opened the program by welcoming everyone to the unique graduation. In the past, WIHS ceremonies have been held in the auditorium; however, it was decided that the class needed to be outside on the field in order to maintain social distancing.

Speakers for the school included Ryan Rodriguez from the Adult Education program, Lucio Rivera from Independent Studies and Pearla Hernandez from Continuing Education.

Rodriguez shared his story of leaving high school his senior year. "I felt it was the right thing to do," he said. "I was absolutely wrong." At the time, he did not realize he was making a mistake – one that kept him from moving forward.

"I learned that in order to succeed in life, we have to face our problems and our fears instead of running from them," he said.

The next speaker, Lucio Rivera, admitted that his senior year was not his best.

"I spent my high school years prepping for what it should have been, that I lost sight of what really mattered," Rivera said. "I lost sight of going with the flow and enjoying the little things, whether it was going to a rally with friends or getting scolded by [a teacher] or getting to class every morning, and lunch. Each of those moments mattered, so it completely threw me off course that my senior year became what it was."

"It's okay to say what you want in life," Rivera said. "How many are willing to work for what they want?"

Hernandez, the third speaker, thanked her family and friends for helping her throughout her senior year.

"We've faced tough times and challenging moments throughout our high school years," she said. "But we were able to graduate during a pandemic by leaning on our family and friends and working hard. I know we can handle whatever life throws at us. This is just the beginning of our real lives. As we move forward in our lives, always remember to work hard and be kind to one another."

Respect and dignity could be seen throughout WIHS's ceremony. Students were respectful of safe distancing, attendees were quiet during the speeches, and everyone on the stage and field wore a face mask.

The WHS graduation was held on Thursday NIGHT. With twice as many graduates and attendees as WIHS, the event took up most of the football field.

Principal Kevin Tallon announced that graduates were required to wear masks while receiving their diplomas, but could choose to remove the mask for their graduation pictures.

Board Superintendent Lori Albrecht addressed the graduates, mentioning two staff members retiring from the district this year, WIHS Principal Martin Lonza and WHS counselor Russ Shafer. Replacing Lonza will be Wasco High Assistant Principal Rusvel Prado, who is a former championship football coach and a past teacher at the school.

Albrecht declared that students are beginning a new chapter in their lives and encouraged them to meet the challenges ahead with optimism.

She also mentioned the different graduate categories reflected on diplomas:

--8 graduated with the State Seal in bilateral language.

--51 students graduated with an associates degree from Bakersfield College as part of the Wonderful Ag Prep Academy.

"Believe in yourself," valedictorian Lopez said. "Know what drives you." He also encouraged his classmates to keep up their work ethic. "Embrace your mistakes," he said. "Learn from them."