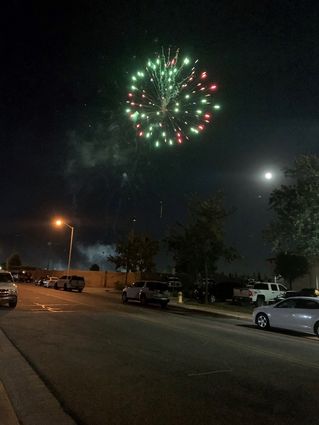 Friday began as a normal day off for many because the Fourth of July fell on a Saturday; however, that changed once messages appeared on Facebook announcing the Orange Heart Foundation would lead a Fourth of July car parade downtown at 1 p.m. and, thanks to Wasco High School, the annual fireworks show would happen that evening.

The Orange Heart Foundation organized the parade and many drivers participated, several with American flags on their cars and colorful messages on their windows notifying that the fireworks would be at the Wasco High soccer field.

Approximately 25 cars paraded down 7th Street and up and down several nearby streets to Highway 46 with horns honking and windows rolled down so drivers could shout out to passers-by on the streets. The drivers couldn't make it to every street, but they did try to hit the main ones in town.

The Orange Heart Foundation members were up late into evening of Thursday strategically placing American flags throughout town. 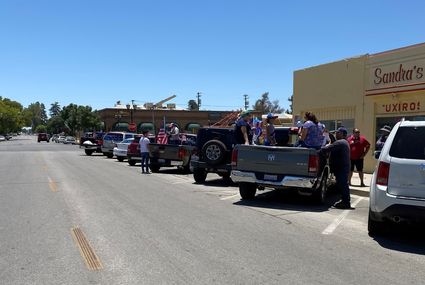 Cars were lined up on D Street ready for the parade.

"We wanted to bring positivity back to Wasco," Orange Heart member Orquidea Ocampo said. "There have been some negative things happening, and we wanted to lift everyone's spirits."

Before the fireworks show, the high school and the city set up some strict guidelines that needed to be adhered to, such as no restroom facilities would be available, and people would have to stay inside their vehicles during the fireworks.

The show was an extravaganza of color with red, green, blue, yellow and white fireworks lighting up the sky.

Most attendees followed the guidelines and watched from the safety of their cars.

Not only was the Orange Heart Foundation responsible for the parade and the fireworks' show, but they were also selling fireworks on the corner of 7th and D street.

What had begun as a normal day off from work, turned out to be a day of celebration for Wasco.