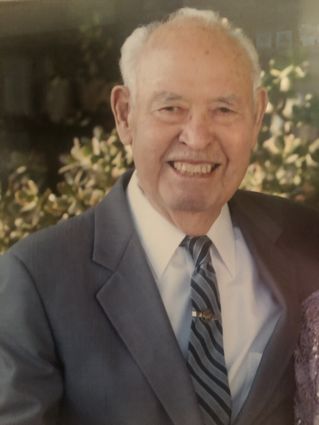 Daniel Ynostroza Escalante, known to friends as "Danny," passed away peacefully on July 19, 2020, in Shafter, at the age of 93 years.

Daniel was born April 22, 1927 in Los Angeles to Juan Escalante and Nestora (Ynostroza) Escalante. He moved to Shafter with his parents and siblings at a very young age, where they settled in the Mexican Colony, just south of town. He spent his childhood helping his family pick cotton, grapes, potatoes and more. He also spent countless hours playing with his brothers, sisters and cousins in the Colony, and in country ﬁelds, where they were known to hunt jack rabbits and get into typical country mischief.

During his teen years, Daniel played for the Eagles baseball team, alongside his closest cousins and friends. It was a time of his life he remembered fondly. During World War II, Daniel proudly served his country from 1944-1946, in the U.S. Army. He loved his country and was recently honored by the kind and devoted people from Honor Flight Kern County. While Daniel was away serving, his cousin and right-hand man, Steve Rodriguez, wrote him a letter and told him there was a new girl in town; she moved in with her family while Danny was away. When he returned from the service, he met the new girl in town, Julia, while he was sweeping the sidewalk in front of the downtown store where he worked. It was love at ﬁrst sight, and the two were inseparable.

Danny and Julia married in 1948, and welcomed their ﬁrst son, Richard, in June 1949. Together, they raised seven children, who they loved and adored. Danny instilled honest, hardworking ethics and values in his children, that had been bestowed upon him. Daniel knew how to work hard and passed that trait down to his own children and grandchildren. He was a true provider to his family, and always put Julia ﬁrst, giving her true companionship and friendship for over 70 years.

Julia called Danny her "Superman," and it was true, he was. Even in his last days, he wore a blue Superman t-shirt, bought for him by his loving daughter, Dolores.

Daniel worked for Albert and Jack Nikkel at Nikkel Iron Works for 55 years, until his retirement in 1998. He was the shop foreman for 50 of those years. Many of the men he worked with remained close to Danny and valued his mentorship. He was deeply loved and appreciated by the Nikkel family, even after his retirement.

A true testament to the person he was. Danny and Julia attended St. Theresa's Church in Shafter, where they were very active and involved. You were sure to see Danny and his sons at the chicken barbecues, always at the grill, and Julia helping in the church kitchen.

Danny was devoted to his entire family. You were sure to see him at the barbecues at Safeway, where three of his kids worked. He took the family and grandkids on countless camping trips -- memories that the family will cherish forever. He rarely missed anything the kids were involved in.

Danny loved Shafter and was proud to raise his family there. He was committed to the community and contributed to its growth and development. He was involved with the Shafter Historical Society and was also a part of Shafter 3 B's.

After Danny retired, and even before, you could always ﬁnd him alongside his sons and grandsons at Randy's and Tim's shops, welding, engineering, building and designing. His inventions were limitless.

Daniel will be lovingly remembered by his wife of 70 years, Julia, and his children, Richard and his wife Becky, Danny and his wife Elaine, Dolores Rangel and her husband Ed, Tim Escalante, Greg and his wife Julie, and daughters in law Paula Escalante and Patsy Moreau. He was preceded in death by his parents and seven siblings; son Randy Escalante; daughter Linda Escalante; and beloved daughter in law Sherry

Visitation will be held at Peters Funeral Home in Shafter, on Thursday, July 23, from 4 to 8 p.m. A graveside committal service will take place at Shafter Memorial Park on Friday, July 24, beginning at 9 a.m.