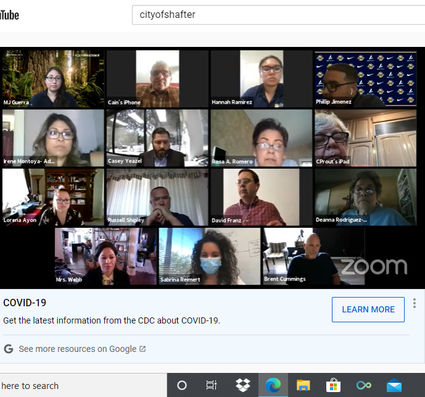 The virtual meeting was attended by representatives of several different agencies in Shafter.

Among the topics was a discussion of the status of each school district and how well they're prepared for the beginning of the school year. Romero told the attendees that the district had to do an about-face regarding its return-to-school plan, which originally included a hybrid system that included both in-person and distance learning. Romero said that the state's updated guidelines placing Kern County on the monitoring list nullified Richland's plan, and that only distance learning would be available for the start of the school year.

Several attendees said they were concerned about what Shafter families could do when both parents work during the day, causing some children to be left home by themselves or with older siblings to watch over them. Givens asked City Manager Gabriel Gonzales if an ad hoc committee could be formed to look for a solution to this problem.

The possible closure of the Shafter branch of the Kern County Library system also was discussed. David Franz, director of the Shafter Learning Center and the Education Partnership Project, told the attendees that with the budget in place now by the county Board of Supervisors, eight libraries throughout Kern County are currently open. With the adjustment to the budget giving the Library Department more money, Franz said, he was told there is a possibility that three additional branches will open. He could not say if the Shafter branch would be one of them. He said support from the City Council and the different agencies at the meeting could make a difference in the final decision.

Shafter Recreation District manager Phillip Jimenez said his department would be willing to do what they could to help the library. Romero, from the Richland School District, said the same. Givens asked what the city could do to help and Franz told him, "A start is a meeting such as this one, showing a united front to the Board of Supervisors and displaying the fact that the city and its schools are willing to work together to keep their library open."

There will be similar meetings in the future, allowing the citizens of Shafter to know what their elected officials and school administrators are doing in this challenging time.