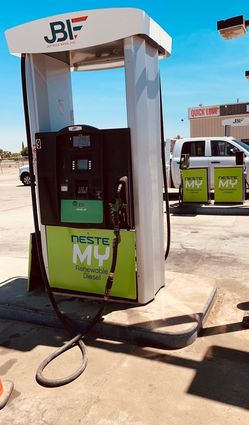 This station next to the Tin Cup is run by Jeffrie Brothers and is open 24 hours a day, seven days a week.

One of the stations, operated by Jeffries Brothers Petroleum, is in Shafter, two are in Wasco and one is in Buttonwillow. The Shafter location is next to the Tin Cup off of Beech Avenue. In Wasco, the two stations are on Highway 46, one of them within the city limits at the Tiger Mart station.

Kristine Janata, account executive at rbb Communications, which represents Neste, says the move is in part due to a recent ruling by the federal Environmental Protection Agency to make 75 percent of heavy duty vehicles emissions-free by the year 2035. With a look to electrification in the future, Janata said, an immediate drop-in solution is the use of the renewable diesel fuel. 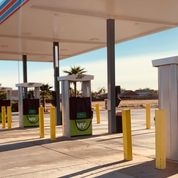 The Tiger Mart in Wasco is one of four locations that offer renewable diesel.

"Covid-19 has shone a light on the important role trucking plays in our economy and in preserving our quality of life," said Carrie Song, vice president for North America at Renewable Road Transport. "That is why it is so important for us to find a way to keep these vehicles moving with much less greenhouse gas emissions and air pollution."

Theodore Rolfvondenbaumen, communications manager for Neste North America, said, "Neste was there to help keep California's businesses moving after the state passed its landmark low carbon fuel standard nearly a decade ago. Since then, our renewable diesel has replaced more than 1.6 billion gallons of fossil diesel in the Golden State."