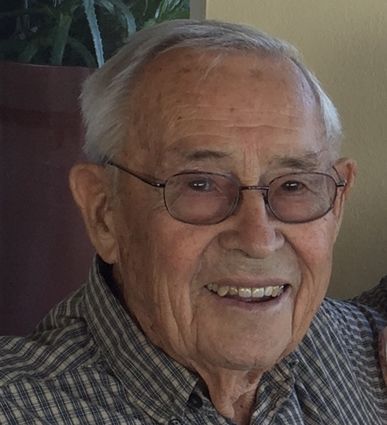 Arthur James Penner was born on March 16, 1925, in Shafter,, to John C. and Susan Thiessen Penner. He was the fifth of six children in the family. The family had moved from Herbert, Saskatchewan, Canada, just over a year prior to his birth.

At the Shafter church he met Donna Lee Boese. They were married on June 21, 1947. Together they raised a family, served in their local church and community, traveled and enjoyed many wonderful vacations together, especially relishing good times with life-long friends Roger and Kathy Frantz.

Art began farming a small parcel of land south of Shafter in 1949. He loved the land, the smell of the freshly plowed earth, the joy of the first sprouts of cotton, the beauty of the almond orchard in blossom. The farm grew, and in time he welcomed into Art Penner Farms (later renamed Furrow Farms) a son and his two sons-in-law. The work was hard, the trials many and the hours long, but the satisfaction and peace found in farming were beyond measure. Over the years, his farm grew potatoes, raisins, alfalfa, cotton, carrots, tomatoes, sugar beets, beans, walnuts and almonds.

As a farmer, Art put into practice his values of honesty, integrity, compassion, generosity, determination and care for the good land. At the same time he found time to throw baseballs to his boys, attend orchestra concerts and dance recitals, cheer at basketball games, supporting his children and grandchildren no matter their endeavors.

Over the years, Art served on various boards and committees, including the Richland School Board, the Fresno Pacific University Board of Trustees, the Calcot board, the Shafter Wasco Irrigation District Board and more. In his church, he served as a deacon, church council member, kitchen committee member and taught Sunday School, and for years sang bass in the church choir.

Art died peacefully on Aug. 1, 2020, at Carrington of Shafter of natural causes, with his wife at his side. He was 95 years old.

His family treasures the memory of a man who gave himself selflessly for his family, his church, his community and others. The family is particularly grateful for the kind and compassionate staff at Hoffmann Hospice and Carrington of Shafter.

Art is preceded in death by his parents, John C. and Susan Penner, his five siblings and their spouses.

Memorial gifts may be made to Mennonite Central Committee at 1010 G Street, Reedley, California 93654 or Listen to Shafter Mural Project at 553 Padre Drive, Shafter, California 93263.