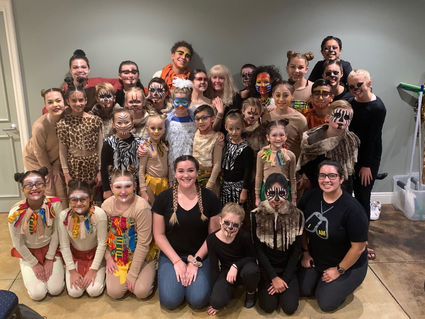 Cris Starrh is surrounded by the cast of their 25th production, The Lion King.

Cris Starrh was recently recognized for the 25 years she has served the youth of Shafter by founding the Shafter Children's Summer Theater, which celebrated its 25th anniversary this year with its production of The Lion King. This was the first production that was done virtually, live streaming the play from Shafter's Ford Theater. After the production, the cast presented Starrh with a video featuring remarks from different cast members through the years. She was also given a special photo plaque.

Starrh began the theater program when she wanted something in town that could keep her kids busy over the summer, giving them something productive to do. With no experience in the theater, she said she was blessed to have talented people on her team to help create such a special group.

"The good Lord put people in my path that made it possible for this program to be a success," she said.

The group's first production was 101 Dalmations. In years to follow, the summer theater did productions of The Little Mermaid, the Wizard of Oz, Annie, Mulan and Beauty and the Beast, among others.

Most of the productions challenged the cast to show off their acting and singing skills, and some had the cast dancing, too.

Growing from an initial cast of 20 and three production staff, the most recent production boasted a cast of 80 and a team of over 20 who helped put the show together.

The program is for children up to 18 years old. Once children age out of the program, they are invited to join the production team and help with choreography, singing, set design, lighting, and a myriad of other positions.

Starrh said another big reason for the success of the program is the wonderful support she has received from the community. From the parents of the children, the talented people assisting with the productions, to the local businesses that have stepped in and helped financially, the community of Shafter has made the program its own.

"We would not be able to do what we have without the amazing support of the community," said Starrh.

Housed in the auditorium at Shafter High School for the first 20 years, the theater was then moved to its current location at the Ford Theater. "We appreciate Shafter High for all of their years of support, but it is really nice to have a place that we can call home," commented Starrh.

In addition to giving the kids and their parents something to be involved in during the summer, the program is also a boon for the Shafter High drama program. The high school has benefited from the amount of kids who have been involved in the program from a young age, giving them valuable experience that is utilized once they enter high school.

"By the time they start high school, the students have already been through the jitters of being on stage and have that confidence of being out in front of an audience," Starrh said. 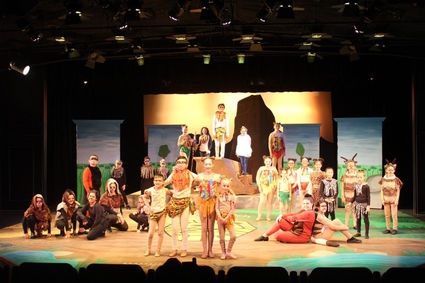 The 25th production of the Children's Summer Theater was this year's The Lion King.

This sentiment has also been expressed by a couple of the cast members. Megan Bloemhof, who was Annie in the Children's Summer Theater production, said the experience has helped her in every phase of her life. "Before I started in theater, I was very shy, without much confidence," she said. "Now I volunteer in class and have self-confidence that I didn't have before." The same goes for Bethany Neufeld, who said she started performing in the first grade. "I started out early and am now in the Shafter High Drama Club," she said. "The experience has helped me so much in my drama classes."

Neufeld said she loves the thrill she gets from performing. "I love the excitement of being in the spotlight," she said.