Who's responsible to ensure compliance? 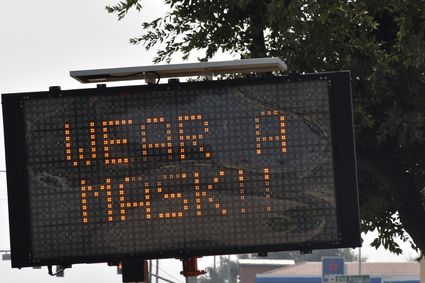 he city of Shafter has begun a campaign encouraging residents to wear a mask in public, aiming to slow the spread of the coronavirus. Digital signs have been placed at different points of Lerdo and Central Valley highways.

Several residents are still concerned that not enough people are wearing a mask in the downtown and residential areas. Deanna Rodriguez-Root, a member of the Richland Board of Trustees, said more needs to be done to make sure residents are adhering to the recommendations of the Kern Public Health Department.

"I was told that it is the county's job to police this recommendation," Rodriguez-Root said. "People need to call them when observing violations by businesses that are not following the county's guidelines."

"I really think it is the mayor's duty to get something done in this area," Root continued. "I think that it starts with him."

At this point, the recommendation by the county is just that, a recommendation that residents wear masks in public. Businesses have been told that they have to see to it that their customers wear a mask for the safety of themselves and their staff.

The city has been reluctant to police the mask policy, deciding to use peer pressure, which has been recommended by the county, and a clear message on the advantage of wearing a mask in the fight against the virus.

Meanwhile, the city has been trying to navigate municipal operations. Kern County remains on the state watch list. All non-essential businesses are closed to inside business, relegating those that want to stay in operation to do so outdoors.

This week saw a decrease in new virus cases in Shafter, with a total of 1075 confirmed cases, while Wasco has over 1,200 as of Aug. 24. There were under 100 new cases in Shafter. However, the decrease could be because of the lag time in cases being confirmed due to a backlog of tests being processed.

City Manager Gabriel Gonzalez issued an executive order allowing Shafter businesses to use their outdoor space for operation without having to obtain special permits with fees attached to them. The fees were waived, allowing businesses to operate in parking lots, or any outdoor areas on site.

This has resulted in several restaurants setting up outdoor dining areas, complete with misters in some instances to keep customers as cool as possible.

With the rising temperatures, the city has also opened its cooling center at the Walker Senior Center, from 1 to 8 p.m., on days that the mercury passes 105 degrees. Operated by the Shafter Recreation Department, the cooling center offers a safe and cool place to endure the heat wave. Residents are encouraged to bring a book, games, or other hobbies to help them fill the time.