Richland making plans for a return to school for some students 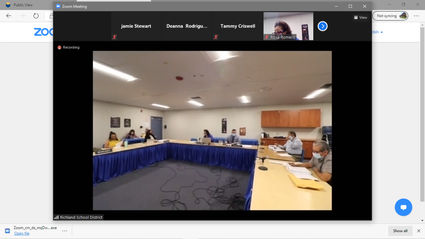 The Richland School Board was given a presentation for a Return to School plan that will see the return of small groups of students to each school, called cohorts.

The plan, which is still in the draft phase, would have groups of no more than 16 people, including staff, that will be in one classroom.

At the beginning of the school year, the district was prepared to open school with in-person learning, with a multitude of safety precautions in place to meet health and safety guidelines. Unfortunately, with Gov. Newsom’s announcement, the plan changed to mandatory distance learning to begin the school year.

According to Superintendent Rosa Romero, due to three lawsuits that were filed in districts in California, one of them involving a district within Kern County, the state of California is directing schools to open their doors with restrictions to students with special needs.

The Special Education program students will begin attending school in small groups, with at least one instructor leading the group. Each student will be evaluated upon entering the school, including getting their temperature taken. Face masks will be worn, as well as the practice of social distancing.

The lawsuits were the result of complaints from concerned parents, believing that their child’s education was being compromised. A rule in the California Education Code states that a student who is unable to participate in a distance learning environment has the right to receive in-person instruction.

The courts’ rulings, which ruled against the school districts, makes it advisable for each district to implement a return to school plan that will comply with the state’s standards, as well as the safety guidelines put forth by the County Department of Public Health.

In the proposed plan, the students will receive a breakfast which would be served in the classroom, followed by instruction for the morning session. Lunch will be a grab and go that would be given to the student at the end of the school session, to be eaten at home.

There will also be a set time for physical activity for the students, who will participate in games and activities that follow the safety social distancing guidelines.

The Richland School District will also be looking to the possibility of starting a hybrid program that would allow a percentage of the students to return to the classroom after the end of the first quarter, which is in mid-October. In this model, there would be two groups of students, A and B, who would each attend school in person two days a week on alternating days. The rest of the week they would be distance learning. The feasibility of this plan depends in large part to the status of Kern County, as it pertains to the state’s guidelines concerning the covid-19 watch list.