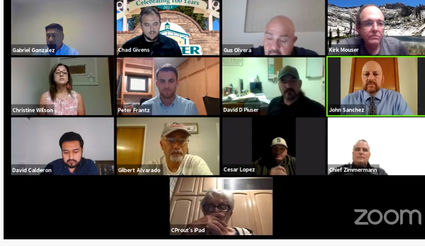 The City Council interviewed candidates for the Planning Commission at their regular Council meeting on Tuesday night.

The terms of Planning Commission members Jon Johnston, Kirk Mouser and Peter Frantz are expiring in December 2020, so that leaves three positions open for on the commission.

Frantz and Mouser decided to apply to keep their seats on the board, but Johnston did not reapply.

Frantz and Mouser were joined by six other candidates who submitted applications to serve on the board. David Calderon, James Harmer, Gus Olvera, John Sanchez, David Piuser and Christine Wilson all wished to be considered.

The Planning Commission appointment is a four-year term with each member receiving a stipend of $50 per month.

Each candidate had a chance to introduce themselves to the council and also answered a series of questions asked by the council members. The candidates come from a variety of occupations and experience levels, with the majority of the candidates having at least some experience in a board room or committee environment.

Calderon has an architectural degree and has worked for a local firm in the area. He also has experience in the program named "Self Help Enterprises," in which families help build their own homes from the ground up. Asked what he could bring to the commission, Calderon added that his experience in professional projects, as well as working in a team atmosphere has given him valuable experience and knowledge for the position.

Frantz, who currently serves as the Planning Commission chairman, said that he is proud and thankful for his time on the board and looks forward to continuing this service to the community. Frantz is a certified public accountant and has worked for a local ag company, the Grapery, since November 2013.

Frantz said, "In addition to my experience, I also have a passion for the city of Shafter and am raising our two girls in Shafter, making the city a safe and stable place to raise a family."

James Harmer had a 36-year career working for Chevron in a variety of positions, including as a maintenance relief supervisor, new construction supervisor, as well as an environmentalist.

In this position, Harmer helped all departments, making sure they could complete their projects without causing any environmental concerns.

Mouser said, that in addition to his 20 years serving on the Planning Commission, he has been a life-long resident of Kern County and has worked in the agricultural industry for most of his adult life. Mouser said that he sees revitalizing the downtown area as a major point of concern moving forward for the city.

Olvera worked for the Shafter Police Department for 12 years, retiring as a sergeant. Olvera said that his years serving the community provided him with the knowledge and understanding of the community's makeup, culture, and the opportunities of growth.

"I would love to give back to the community of Shafter and look forward to working with you guys moving forward," he said.

Piuser has lived in Shafter since 2016, when he moved here from Bakersfield. Piuser has worked in the construction industry his entire adult life and believes that this extensive experience gives him a good foundation for serving on the commission. He said that he loves to learn also, giving him the desire to help the Shafter community.

"I look forward to working with the City Council on new plans and ideas for our small but exciting Central Valley California city," he said.

Sanchez has lived in Shafter since he was 8 years old. Sanchez has worked in the public service arena since 1995, beginning his career with the Kern County Sheriff's Department. He transferred to the Kern County Probation Department in 1998 and has remained there for the last 22 years.

Sanchez said he can help make Shafter an even more desirable place to live than it already is. "My 25 years in public service with a government agency has allowed me to become involved in the planning and budget process. I also understand how important collaborative are to achieve common goals," he said.

At the end of the interview process, City Manager Gabriel Gonzales told the candidates that the council would consider their applications and would appoint three candidates to those posts during the regular City Council meeting held on Nov. 17.