Westside ushers in Christmas with boutique 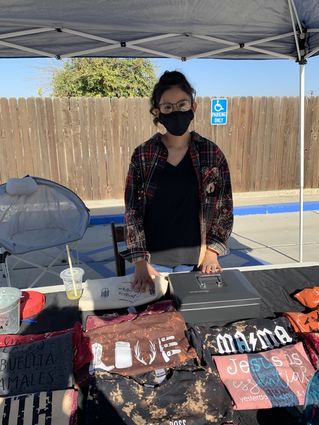 Gypsy Crafts was one of the booths at the boutique.

The Christmas spirit arrived early in Wasco on Saturday, Dec.5.

Many attendees commented they were happy to be able to get some shopping done. They also said how thrilled they were to be open before the county closed down again.

The boutique was filled with several booths offering a pre-holiday outdoor shopping experience for those who needed to get out of the house. A food booth was also available to provide snacks.

Vendors were creative as they displayed unusual items for sale. Emily McCurdy created a new trend when she purposely placed bleach marks on flannel shirts. She called her business "Stay Bleachin." What one might think is a horrible laundry mistake is now something to proudly wear as a new trend in winter wear.

"I haven't seen it anywhere else," McCurdy said. "I just started doing it."

Another booth was Tammy Wiedmann's jewelry designs. She displayed jewelry designs by Plunder and had their 20/21 mini catalogue available to browse. Wiedmann was joined by her husband, Dennis.

Even Lularoe clothing was available at the boutique. Jaiva Rodriguez and her daughter, Nevaeh Snow, were happy to be able to be outside working.

Patti Smith had a booth that one doesn't see very often. The booth was called Damsel in Defense and included many items that women (or anyone) can use to defend themselves in case of an unexpected attack. Her company offers pepper spray, which she says is legal, and a car emergency tool with digital tire gauge. 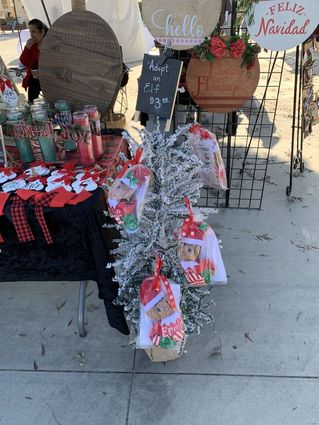 The tire gauge is sized to fit in a glovebox and features a white LED flashlight, red LED work light and window breaker plus six foldaway tools such as pliers; tread ruler, two screwdrivers, scissors and a seatbelt cutter.

The company also sells stun devices. A stun device is a non-lethal, pain compliance tool that can be effective as a self-defense tool when it makes direct contact with an attacker. It works by creating electrical pulses that send the nerve cells that control muscles into chaos, causing pain. The Damsel in Defense stun devices allows them to deliver electrical shock to an attacker without giving the user the ability to be potentially lethal.

The purchaser must know what the area restrictions are regarding the use of these devices.

Customers, mainly women, were circled around the booth with a number of questions to ask. Patty Clark can be reached at 661-496-2893 or [email protected]