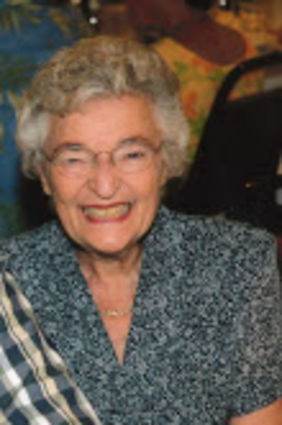 Elsie Bernice Warren passed away on Dec. 24, 2020, following a brief hospitalization at Cedars-Sinai hospital in Los Angeles, at the age of 93. She was born to Henry and Lydia Mettler in Shafter, California, on Jan. 13, 1927, the ninth of 10 children. She is preceded in death by her 5 brothers and 4 sisters and sadly, her daughter Andrea Ellis.

Elsie made Shafter her home for her entire life. In her childhood, she lived with her family on her parent's farm and attended Shafter schools, graduating from Shafter High School in 1944, where she served as homecoming queen and was recognized as valedictorian. After graduation, she attended Bakersfield College for a short time before starting work at the U.S. Army Air Corps flight training base located at Minter Field in Shafter. In 1947, Elsie married Robert (Bob) Warren at Ebenezer Reformed Church, in Shafter. They were happily married for 73 years. Ebenezer Reformed Church was Elsie's childhood church, and the church in which she and Bob raised their 4 children. She was a professing member for 80 years and the longest professing member of the church at the 100th anniversary of the church in 2019. She devoted herself to her husband, her family, and her church. Elsie's long life brought much joy and laughter to her family and friends. She will be deeply missed.

In lieu of flowers, the family requests gifts be sent to Ebenezer Reformed Church Memorial Fund or the American Heart Association.