By Toni DeRosa
The Shafter Press and Wasco Tribune 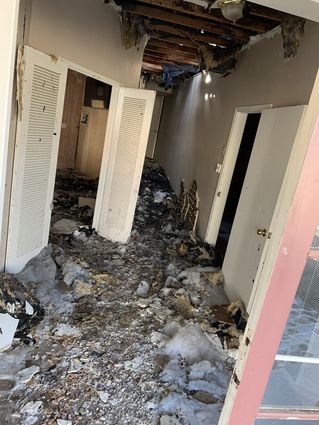 The interior of Peters Funeral Home shows a significant amount of damage caused by the fire.

Peters Funeral Home in Arvin was one of several businesses damaged after a number of fires in the area.

The funeral home at 600 Tucker St., two abandoned buildings and an antique boutique off Bear Mountain Boulevard sustained damage after four fires ripped through the area.

Mayor Olivia Trujillo visited the sites of each of the fires and expressed her concern about the large number of fires in such a short period of time.

The Kern County Fire Department reported that the two businesses were burned down. 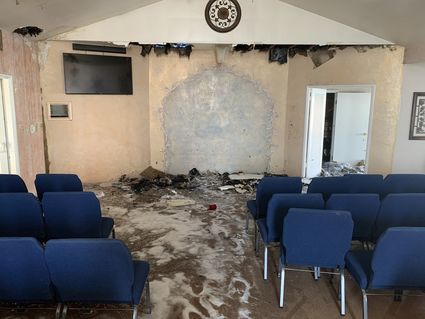 "The building will most likely be a total loss," Peters Funeral Home Owner Rick Woody said. "Most estimates put the damage above $250,000, due to the amount of smoke and water damage."

He also stated that Peters will have to rebuild from the studs up.

"We will continue to do business in the city of Arvin at a location still to be determined as the rebuild is conducted," Woody said.

He said the cause of the fire was electrical.

Woody would like to thank the Kern County Fire Department for their "amazing effort at saving this unique building in Arvin."

Peters Funeral Home Office Manager Elena Gomez said most likely scheduled Arvin funerals would be moved to Shafter because it is the closest facility to Arvin.