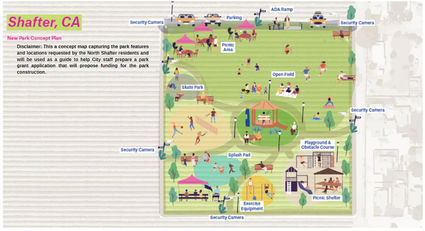 This illustration is the result of workshops including community members.

The plans for a proposed park in northern Shafter are now online after the community got a chance to help design the park.

The park will be the first in the northern Shafter neighborhood near the intersection of Fresno Avenue and Highway 43, adding to the improvements and enhancements that are being done in that area.

There is a shoulder improvement project underway, and there is a study being conducted for the possible need for a stop light on Highway 43.

The new park design is the result of several workshops that were held both virtually and in-person. Residents were invited to make suggestions on what equipment should be at the park, as well as what activities would be preferred by residents going to the park.

The result is a design that the city will use as a guide when creating the final design that will be presented to the state as they apply for the grant that will fund the project.

Some of the highlights of the design are the exercise equipment, skate park, and splash pad, as well as an obstacle course.

For years, the idea of a skate park has been batted about at the city level, with a couple of sites with skating equipment set up, but the projects never lasted more than a few months. 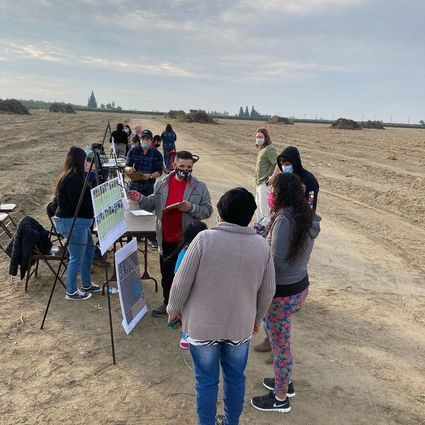 Several workshops were held to get input from residents.

There was also talk about having a dog park in Shafter, but they are still discussing where the location should be, and what sort of design would be the best option. As for the new park in northern Shafter, residents can also expect a splash pad and security will be a priority, with several security cameras on site.

The next step in the process is the application that will be sent to the state for approval. There is over $1 million in grant funds that can be allocated if approved. According to Melissa Bergen, of Listen to Shafter, it is been great that the citizens have been involved in the process.

"It is great for the community to be able to be involved in the process, making them a part of the solution and its implementation," Bergen said.