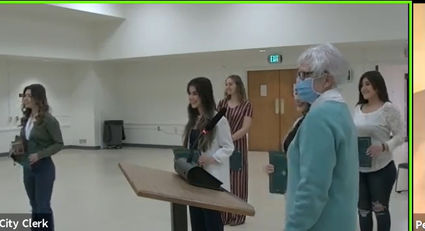 The young women of the DYW of Shafter were honored at this week's council meeting.

The City Council presented the Key to the City to reigning Distinguished Young Woman of Shafter Shelbee Ramos.

Ramos recently competed in the state level competition and won a special award at the event. Ramos won a $2,000 scholarship for her title of Shafter's DYW, along with an additional scholarship for winning a phase during the event.

Also recognized by the council were First Runner-up Alicia Pompa, Second Runner-up Santana DelaRosa, Lilian Jaime, who won the Talent portion of the event, and Cathy Garcia, who won the Spirit Award.

Police Chief Kevin Zimmermann also presented a report to the council on progress the department made in 2020.

Zimmermann said that all phases of crime in Shafter were down in 2020, compared to the past five years, excluding property theft. In a previous interview, Zimmermann mentioned that they are facing a challenge with the release of thousands of inmates from prisons, signed off by Gov. Gavin Newsom in July.

Zimmermann also told the council of the challenge of arresting the same criminal multiple times.

"We might arrest the same individual more than once or twice in the same week," he said. "The punishment and the arrest procedures and policies make this possible. They are out on the street after an arrest, with us not being able to hold them for any length of time."

At its meeting, the council also approved the application for Proposition 68 funds for the new park in northern Shafter at the intersection of Highway 43 and Fresno Avenue.

"We held helpful workshops, both virtual and in-person, gaining input from the residents, on what they would like to see in their new park," said City Manager Gabriel Gonzales. "We took several of these suggestions and prepared an application. Among the proposed features of the new park are a spray pad, multi-purpose fields, exercise equipment, and shaded picnic areas." Gonzales said that the project will come with a price tag of around $3 million.