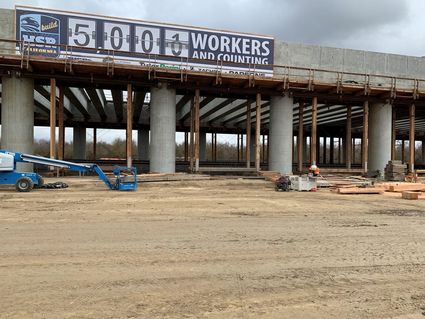 The High Speed Rail recognized a total number of 5,000 workers on the project to date and celebrated that number by placing a banner in Wasco at Jackson and Highway 43.

In August 2008, the California Assembly approved the measure known as 1A to create a High Speed Rail system to run from San Francisco to San Diego. However, in February 2019, Gov. Gavin Newsom scaled back the project to run from Merced to Bakersfield.

Meanwhile, the HSR continues to hire workers and request additional funding in the amount of $4.1 billion in appropriation to complete construction in the Central Valley because costs and schedules continue to grow.

That money should complete Newsom's starter system from Merced to Bakersfield. This rail link would not connect to Los Angeles.

The City of Wasco has had several meetings and correspondence with the HSR Authority regarding the blight and danger of the former farm labor camp housing complex and the demolition of that area.

The HSR provided a copy of the letter it sent to former Mayor Tilo Cortez dated Sept. 3, 2020 regarding the demolition of the former farm labor camp housing.

The HSR replied to the city that the original agreement was for the HSR to provide an amount up to $10 million, which was to include the demolition of the former farm labor camp and not to exceed that amount; however, the city is requesting an additional $5.1 million to demolish the former camp.

CEO Brian Kelly from the California High Speed Rail Authority stated in a letter to former Mayor Tilo Cortez, "For months, our staff has been working with the City on finding solutions and potential funding opportunities for the abatement and demolition of the former Wasco Farm Labor housing. In addition, CEO Brian Kelly has visited Wasco and met with the mayor and city manager. The City and the HSR will be continuing discussions on this matter."

City Manager Daniel Ortiz-Hernandez said that "The City of Wasco cannot afford the cost to demolish the former farm labor housing complex, but it also cannot afford to let the complex further deteriorate and continue to be a burden on city resources. "

Ortiz-Hernandez added that should the California HSR Authority fail to address the condition it created, the city would be forced to find the funds to demolish it itself. Workers gathered at the top of the scaffolding.

"The significant cost would be an insurmountable burden for years to come and cause irreparable harm to the residents in Wasco," Ortiz-Hernandez said. "City services would be negatively impacted either through cuts that may have to be imposed or the inability to expand or add new services required of our growing community."\

Mayor Alex Garcia has also been vocal about the city's position that it is the HSR's position to help alleviate the eyesore and dangerous site from the city's landscape.

According to HSR Project Manager II Toni Tinoco, "The project has had trouble along the way, but, it's here," she said. "Wasco should be done in the next 12-15 months."

There are 798 workers from Kern County working on the project out of the 5,000 total.