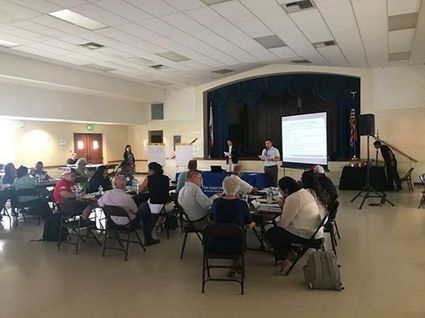 The steering committee was formed to help reduce emissions and improve air quality.

Negotiations about pesticide notifications between the Kern Ag commissioner and the state Department of Pesticide Regulation have broken down.

Kern Ag Commissioner Glen Fankhauser recently wrote a letter to the state that he would not comply with Director Val Docini's request to give the community advanced notification of when and where farmers plan to spray pesticides deemed particularly dangerous.

When AB617 passed in 2017, a steering committee was formed in Shafter to develop a plan to reduce emissions in the air. Made up of city officials, business owners and concerned citizens, the group has met monthly for over a year.

In December of 2019, the group turned over its plan to the California Air Resources Board for approval.

Then the pandemic hit, slowing the implementation of many items on the plan. According to Shafter Mayor Cathy Prout, a member of the steering committee, there have been improvements made in efforts to reduce emissions.

"There is a plan in place to plant groups of trees, which will help the air quality," Prout said. "There are also plans and programs in place to help farmers change their equipment to more eco-friendly machines, improving the air quality as well."

Regarding the pesticide issue, Prout said that there had been a couple of plans submitted, but they didn't go far enough in notifying the public when spraying.

"There is a notification plan in place that has door knockers placed on homes in the area when certain pesticides are going to be sprayed," said Prout.

According to Fankhauser, the efforts the committee are making for being notified is unreasonable and he said that the information could also be used against the farmers by members of the committee who want to eliminate spraying altogether. Fankhauser said there are other motives in play other than protecting the residents and giving them adequate notice before spraying.

There have been efforts by third-party mediators to help with the impasse, but those too broke down.

Shafter High graduate and former state Sen. Dean Florez, who now serves on the California Air Resources Board, attempted to mediate a resolution between the two parties, but his efforts lasted one meeting, after which he backed off of the situation.

Florez has not provided a reason for why he is no longer involved in the effort to resolve the situation.