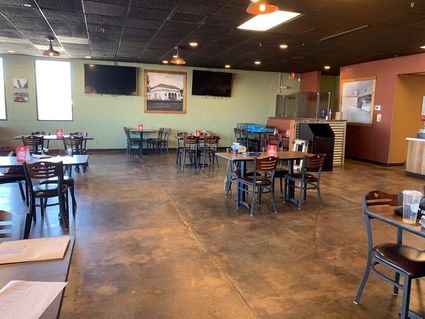 Seating is spaced over 6 feet apart for safe dining.

Wasco residents are like everyone else, they love their pizza and wings and an occasional ice cold beer or soft drink. That's exactly what owner of Pizza Factory Russ Adkins was hoping for when he made a career move from teaching to owning a franchise.

Due to family illness, Adkins was forced to close Pizza Factory; however, CEO Mary Jane Riva and her husband, Bob, from Oakhurst decided to rescue the Wasco Pizza Factory. The restaurant reopened its doors Feb. 11.

"Russ did such an outstanding job relating to the community in Wasco," Riva said. "This was a store we knew needed to stay open."

Riva said that there are 105 stores in five states and a new model is being created currently in Texas.

Riva also said that there are currently 13 employees in Wasco with three drivers ready to deliver hot pizza to customers.

Prior to the pandemic, the restaurant was a favorite spot to hold meetings and end-of-season sporting celebrations.

Even though Kern County is still in the most restrictive tier, restaurants are able to provide take-out or delivery.

A large white outdoor dining tent sits outside the restaurant in the parking lot. Riva also said that the city did a lot to make Pizza Factory feel welcome again.

"The city asked us if we wanted outdoor dining available, and we said yes," Riva said. "Next thing I knew, there was a large tent in the parking lot."

Riva said that it's difficult to believe that the state has been going through the pandemic for almost an entire year.

Pizza Factory is currently part of an anti-bullying program and No Kid Hungry. Donations to No Kid Hungry will provide food to kids in America.

Pizza Factory offers appetizers such as twisted breakstix, garlic bread, meatballs and wings; salads and soup such as pasta salad, antipasto, Cesar and Greek salads and seasonal soup of the day; pasta such as lasagna, calzones and lots of pizza choices. Gluten free and cauliflower crusts are also available. 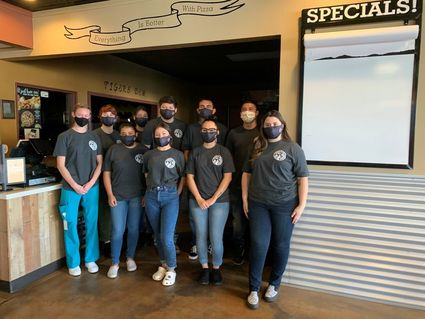 Some of the 13 employees working at Pizza Factory.

Pizza Factory is continuing to hire and is open Monday-Thursday from 11 a.m.to 5 p.m. and Friday and Saturday from 11 a.m. to 10 p.m. Manager for the Wasco Pizza Factory will be Hugo Zubia who has worked in the McFarland store for the past 10 years.

"My first job was in 1990 opening the store in Murietta," Riva said. "Prior to that I owned a donut shop."

She added that her brother and sister had a Pizza Factory.

Riva said that Pizza Factory is not like other franchises because they want to become a familiar face within each community in which a store is located.

Riva also mentioned that followers can sign up to be a follower online to receive special offers.

"Customers should register online to hear about updates and extra events that are happening," she said.