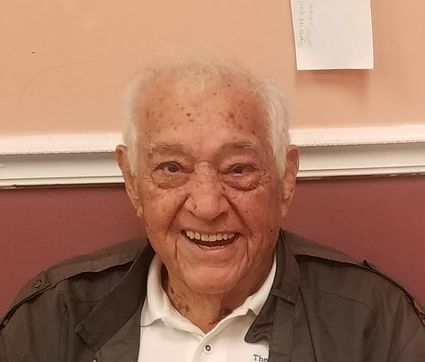 For many people, "Planes, Trains and Automobiles" is the title of a popular movie. For John Araiza, it is a snapshot of the passions of his life.

John passed away Sept. 27, 2020 – just two days short of his 89th birthday. He spent his life in service to his Lord, country, community, and large, extended family.

He was born Sept. 29, 1931 in Allensworth, California (population 500), in a one-room house with no electricity and an ice box for a refrigerator. John shared the home with his parents and seven brothers and sisters. His father (Juan) worked for the Sante Fe Railway -- fortunate to be employed during the Great Depression.

John's mother (Maria-Dolores) passed away when he was a young boy. The brothers and sisters raised themselves while their father worked. After moving several times, the family settled down in Shafter. Every morning before school, John and his siblings would feed the goats, gather fresh eggs from the chickens, and milk their cow. After school, John and his brothers would find odd jobs to help make ends meet. They would work in the fruit and vegetable packing sheds, or in the fields picking produce or cotton.

As challenging as these times were, John's boyhood was filled with adventure. He and his siblings and friends would spend summer days jumping onto hay bales in the fields and picking and eating fresh apricots and grapes in the orchards. On hot days, they would swim in the rivers and streams in the foothills of the nearby Tehachapi Mountains.

As a young teen, John would follow his father to the railroad yard. He was fascinated by the large locomotives and the hundreds of boxcars that entered the railyard every day. To spend more time around the trains, John took a job counting the freight cars and preparing the manifest used to schedule the loading of the cars with freight. It was a late-night job, and John would work in the railyard until the middle of the night -- then hurry home for a little sleep before getting up for school.

As fascinated as he was with trains, he was more enamored by airplanes. John would sit at the edge of the fields as the crop dusters would fly over the farms, spraying the crops below. Then, he would ride his bike to the fence of the local airfield to watch the planes take off and land. John [BEGIN ITAL]knew[END ITAL] his future would be flying-- high above the clouds...

While much of his money from after-school jobs helped buy food and clothes for his family, John saved a portion to pay for flying lessons. He would never miss an opportunity to fly, and eventually earn his pilot's license.

Upon graduating from Shafter High School, John was offered a full-time job with the Santa Fe Railway. However, John had other ideas: He wanted to go to college and become a commercial airline pilot.

John knew he could not afford the college tuition – but his younger brother Ike had an idea. Ike had just joined the Navy to earn money for college. Ike told "Johnnie" to do the same. John decided to follow Ike's advice: He would join the US Navy, apply to be a military pilot to earn more hours in the cockpit, and save money for college.

The Korean War started around the time John enlisted. Trained pilots were desperately needed. Most Navy pilots were officers, trained by the military. Although John was not an officer, he was already a licensed pilot and was quickly assigned to a squadron.

John was stationed onboard aircraft carriers, with fighter squadron VF-54, better known as the Hells-Angels. The exploits of the carrier-based Hells Angels would become the inspiration for [BEGIN ITAL]The Bridges at Toko-Ri[END ITAL] a novella by the American author James A. Michener. The book details the experiences of US Navy pilots in the Korean war, as they undertake a mission to destroy heavily protected bridges in enemy territory.

John was stationed in New Jersey for his final months in the military. Here he would meet his wife, Frances Alloco. At the time there were very few openings for commercial airline pilots, so John returned to his first love – trains. He became a conductor for the Erie Railroad in New Jersey.

John grew homesick for his family and the warm weather of Southern California. He also wanted to be closer to the airline industry, since many commercial airlines had large operations in California. In the mid 1950s, John and Frances packed their car, drove across the country and moved to Torrance, just south of Los Angeles.

John secured an airplane mechanic job with Western Airlines. He was also ready to go to college. His plan to enroll in college would be delayed when Western Airlines hired him as a pilot/flight engineer. Only a year later, he lost his job during a pilot's strike.

The year was 1959 and John had a year-old son (James) at home. He knew he needed to work to support his young family, but decided it was "now or never" to go to college. John enrolled in El Camino Community College by day and took another airline mechanic job at night – this time at National Airlines. After two years at El Camino, he transferred to Long Beach State, where he earned a bachelors degree in industrial arts and engineering -- and was admitted to the honor society of Phi Kappa Phi.

Once again, a chance to get back into the cockpit arose – this time with National Airlines. The airline had enough pilots, but a shortage of flight engineers. John [BEGIN ITAL]knew[END ITAL] this was his calling – to use his mechanical skills [BEGIN ITAL]and[END ITAL] fly for a living.

For the better part of three decades, John was a flight engineer for National Airlines, then Pan American World Airways and finally retired from Delta Airlines.

His career would take him to every continent except Antarctica. Frances would often join him. They explored New Zealand, went on a safari in South Africa and went sightseeing several times throughout Europe.

In 1966 John transferred from Los Angeles to National Airlines' home base in Miami. Frances and James soon followed, when John found a home in a South Miami-Dade suburb (now The Village of Palmetto Bay).

When he was not flying, John stayed busy "on the ground." He obtained a Florida teacher's certificate. On his days off he would serve as a substitute teacher for the Miami Dade school system. He loved to teach shop, science, and auto repair classes. John wanted to share with students the skills, training and education that had carried him from the farms to the skies.

In his neighborhood, John was the local, "Mr. Fix-It." His friends and neighbors would come to him with car trouble, or if something needed attention in their homes. If it were electrical or mechanical John could fix it. Even after retiring from flying and teaching, John remained active working on cars and making repairs to his home and his rental properties.

Frances passed away in 2002. John made a commitment to dedicate the rest of his life to serving his community, practicing philanthropy and worshipping our Lord. For the next two decades until his death, John served as a Rotarian, attended a weekly Bible study and was a benefactor for many charitable organizations.

During one of his daily morning exercise walks, John met the next love of his life, Carol Bowers. John and Carol would be companions for many years. Together, they attended church, went to dinner (even occasionally dancing) and traveled.

John never forgot his roots. From the challenges of his youth, he learned the value of hard work, education and never losing sight of your dreams. He cherished his family and friends. Each year he would gather for reunions with the surviving members of his Navy squadron and fellow flight crews from the airlines.

Every summer, John would return to his hometown of Shafter and visit with his brothers, sisters, nephews and nieces. Picnics in the farms, bonfires on the beach and backyard barbeques with family and childhood friends created memories for a lifetime.

A couple months before his passing, John sat with his son James and reflected on his life. "I have truly been blessed. It's been a good life!"