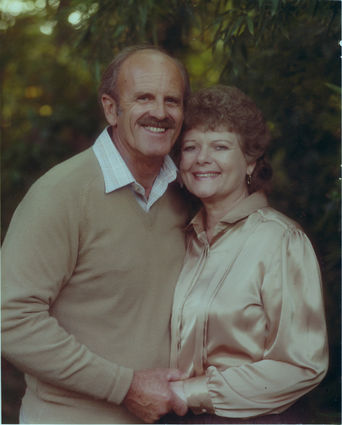 On Sept. 1, 1928, Katherine Nikkel was born to Henry H. and Agatha Williams Nikkel in Shafter.

She had many enjoyable memories from her youth, growing up on her father’s farm across the street from Myrick’s Corner, just north of Shafter. She was part of the Shafter Mennonite Brethren Church family and attended Richland School. At a young age, she accepted Jesus as her Savior and was baptized when she was in her teens.

That peaceful childhood was interrupted on her 11th birthday when her mother passed away from kidney disease. With her two older sisters grown and off pursuing work in Bakersfield, she stepped up to help her father take care of her older brother and younger sister by managing many of the household chores. A few years later her father was remarried to Mary Fast. Kathy’s stepmother came into the home and interrupted the routine which Kathy had established. Even though their relationship was cordial, Kathy was ready to move on as soon as possible.

When she was 14, while attending Shafter High School, she and a 16-year-old boy from Wasco, started noticing each other while attending various services at church. Roger Frantz graduated and while she was still in high school, he asked if she would wait for him while he worked as a smokejumper in Montana during the Second World War and the year immediately after. In his tent he displayed Kathy’s picture, and some of the other smokejumpers asked him who the movie star was. Upon her graduation, Roger Frantz gave her an engagement ring.

After one semester at Pacific Bible Institute in Fresno, Kathy and Roger married April 11, 1947, and moved into a tiny house on Western Avenue on the Wasco-area farm close to Roger’s parents. It was while living there, in 1949, that they were blessed with a son, Thomas, and then in 1951, a daughter, Melissa. Kathy was fortunate to be a stay-at-home mom.

In 1954, while traveling up Highway 43, she and her 2 small children were struck by a car running a stop sign at Merced Avenue. The young children in the back seat weren’t injured, but Kathy’s beautiful face broke the windshield of the car. She spent several weeks in the hospital for several surgeries. Life went on, and her injuries healed, but she had to learn to live with the scars.

When Roger’s parents moved into Shafter in the mid ‘50s, Kathy and Roger

moved into the “big” farmhouse next door. It was there they were blessed with another son, Samuel. She was a room mother and Cub Scout leader, and she was always available for her children and helped them find their way and build their trust in the Lord. She drove them to the doctor many times with accidental injuries, even though the sight of blood made her weak-kneed. The family went to many Dodger games together; she even caught a foul ball once, or shall we say, her purse caught it while just sitting in her lap.

She put in many years as a Sunday School teacher and VBS leader. She also was always a support to her husband, who was very active in church and church conference leadership. Their home was the scene of countless meals and overnight accommodations for visiting conference leaders, missionaries and friends. She demonstrated hospitality to her kids. Kathy was also a generous supporter of the Mennonite Central Committee, especially the annual quilt auction to the point of purchasing a quilt for each of her grandchildren.

The special friendship that Kathy and Roger shared with Art and Donna Penner is something that has endured for over half a century. Their families shared many camping trips and road trips pulling their little Arrowhead camp trailers. A trip that is still spoken of was the one they took together to the Seattle World’s Fair in the summer of 1962.

These trips are partly responsible for the travel bug her children, and grandchildren, have for seeing faraway places. She and Roger traveled all over America as well as many nations around the world. They would often enlist various other couples to go along with them on cruises and tours. The desire to see distant locations may have arisen out of her love of reading, it being her favorite pastime. A simple way she engaged with others was by gathering two or three other couples for an evening playing table games, especially a card game called Cadillac.

How blessed this family has been with a prayer warrior that Kathy was for her family. She has stood in the gap for her family many, many times. because of her unconditional love for her family, family gatherings were peaceful, loving and relaxing. She gets a lot of the credit for that. A mother sets the mood and Kathy was always in a good one when her family was together.

In the late ‘50s, they bought another farm with a bigger house on Fresno Avenue near Maple School south of Wasco and West of Shafter. They remained there until Roger’s death in 2012. Kathy bought her own home on Sycamore Street in Shafter shortly after and resided there until 2019, when she moved to Carrington of Shafter when she needed assistance caring for herself.

On March 3, Kathy walked into the arms of Jesus, at the age of 92. Her

daughter was with her at the end of this part of her life. She had been placed on hospice about six weeks earlier to help deal with chronic back pain. At that time, no one thought things would transpire toward end-of-life this quickly. That decline was precipitated by a seemingly simple fall that resulted in a fractured pelvis.

She is preceded in death by her husband of nearly 65 years, Roger L. Frantz; her parents; her stepmother; her sisters and their husbands, Edna and Daniel Gloeckler and Claire and Jack Gerrie; her brother and his wife, Alvin and Minnie Nikkel; her brother-in-law, Gus Stoesz; Roger’s sisters and their husbands, Emily and Otto Pankratz, Juanita and Albert Enns, Edna and Art Wiens, Helen and Adolf Buhler, Betty and Norman Berg; and Roger’s brother, Daniel Frantz.

A graveside service was held on March 8 at the Shafter Memorial Cemetery. A heartfelt thank you to the staff at Carrington of Shafter and the nurses and aides from Hoffman Hospice for lovingly caring for her.