Tigers defeated in opener at Templeton 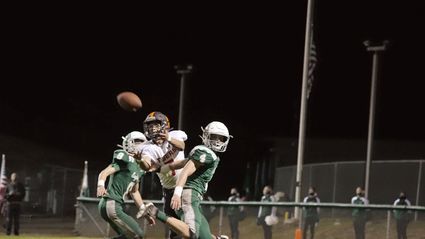 The Wasco High Tigers couldn't dig out of a first half hole when they traveled to Templeton to take on the Eagles on Friday night, dropping their season opener by a score of 39-22.

"Offensively, we had 22 points, but defensively we gave up 39," Free Safety Kevin Chavez said. "There were lots of mistakes given out. We didn't play the game we could have, but we are moving forward and bouncing back this week."

The Tigers couldn't get their offense started in the first quarter, with the Templeton defense stifling the Tigers' running game. The Eagles then turned their opportunities into points, with a touchdown on their first possession of the game, going up 7-0.

The Eagles made the score 15-0 after they recovered a Tigers' fumble, scoring on a quarterback keeper with a two-point conversion.

Wasco had a drive going toward the end of the first quarter, but a fourth down and short attempt came up lacking with the Eagles' defense stopping the Tigers to take over on downs.

Templeton cashed in a couple of plays later with a long pass that set up a touchdown run, giving the Eagles a 22-0 lead.

Templeton added a field goal at the end of the first half, giving them a 25-0 lead at the break.

The Tigers started the second half on a promising note, but a touchdown was called back when they were flagged for a holding call, giving the Eagles another chance at the end zone.

"A couple of touchdowns were called back on us, but they weren't enough to bring Wasco back home," ASB Commissioner of Male Athletics Ricardo Carriedo said.

Templeton stretched their lead to 31-0 a couple of minutes later. 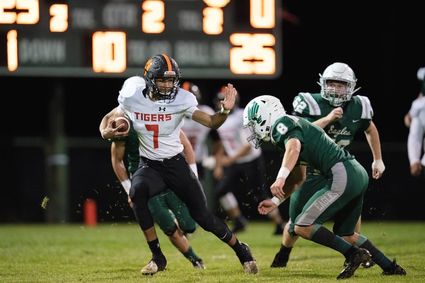 Andre Cordova runs for yards during the third quarter.

As the third quarter was running down, the Tigers got their first score of the season when Christian Alvarez broke off a big run and ended up in the end zone, making the score 32-7. With seven minutes to go, the Tigers made it interesting with another score by Andre Cardova, cutting the Eagles lead to 32-14.

The Eagles answered back with another big run by their quarterback giving them a 39-14 lead.

The Tigers did manage to tack on a late touchdown by Cardova, cutting the lead to 39-22, but couldn't get close as the Eagles managed to run out the clock the rest of the way.

"It wasn't the result we wanted Friday, but we put up a fight," Junior Quarterback Jaycob Ruiz said. "It was a great team effort. It felt good after a whole year with no football to be out there with my team. I wish, I just wish I could've had a full season with this team."

The Tigers will be on the road again on Thursday night as they travel to Tulare Union for a 6 p.m. kickoff.