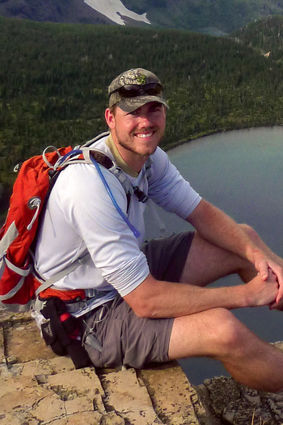 Kyle Edward Krause, beloved son, brother, husband and father, was welcomed into Heaven by our Savior on March 21, 2021.

Kyle was born July 10, 1986 in Bakersfield, California to Kin and Kathy Krause. He grew up on the 1,360-acre family farm in the small farming community of Wasco, where he and his younger brother, Justin, acquired a strong work ethic and love of the outdoors. Kyle loved spending time at the family cabin at Shaver Lake, snowboarding and waterskiing during the summer and winter months. It was here that he began his love of fishing and the outdoors, which would lead to the immense joy he found in hiking, camping and hunting with friends and family.

As a standout scholar and athlete in grammar school and high school, Kyle loved competing in academic and sports competitions, winning countless awards representing Wasco's best and brightest at the regional and state level.

He started showing swine as a 4-H member in grammar school and was an active member of Future Farmers of America at Wasco High School, attaining his State Farmer degree. Kyle loved competing in sports, as a Little League All-Star team member and with the local recreation and high school swim teams, but his love for playing basketball would result in a dream come true as an NCAA Scholar/Athlete at California State Polytechnic University, Pomona. At 6-foot-8, he played center for the Cal Poly Pomona Broncos throughout college and was a member of the NCAA Division II Men's Basketball National Runner Up Team in 2009. He graduated Cal Poly Pomona summa cum laude with a bachelor of science in mechanical engineering and was named Scholar Athlete of the Year four years in a row. He also received the Dean's Scholar of the Year honors.

But he wasn't done. In true Kyle overachiever form, he was also president of the Cal Poly Pomona Baja Racing team which designs, builds and races in an annual international collegiate off-road vehicle competition. Kyle and his team won the 2008 competition, beating nearly 200 entries, bringing bragging rights home to the Cal Poly Pomona School of Engineering.

What makes Kyle's life even more impressive is that he accomplished all his goals after being diagnosed with Type 1 juvenile diabetes at age 12. He proved to himself and everyone around him that this disease would not control him; he controlled it, never allowing diabetes to diminish his activities or accomplishments in life. It is no surprise that he also was active in the Juvenile Diabetes Research Foundation..

While attending Cal Poly Pomona, Kyle met the love of his life, and immediately following graduation married Erin Wendt on June 27, 2009. With a job secured at BAE Systems in the defense industry, Kyle and Erin moved to Michigan, where they knew no one, and ultimately settled in Bloomfield Hills. Two years later he accepted an engineering position with Peterson Spring, where he went on to create the Peterson Mechatronics group dedicated to designing, developing and building machines that manufacture spring parts for vehicles. While at Peterson, Kyle was also provided the opportunity to attain his MBA from Michigan State University, graduating with honors.

Kyle and Erin were blessed with the birth of their first son, Colton, on December 16, 2013, and Owen arrived 19 months later on July 6, 2015. Kyle and Erin embraced the Growing Families International ministry, which has provided biblical teaching to help raise their children as tomorrow's leaders. Kyle gave everything he had into raising his sons to know God and live life to its fullest. Colton and Owen will forever be the embodiment of Kyle's strength and love.

In April 2020, Kyle moved his family to Waterford, Mich., and purchased a waterfront home on Watkins Lake. That same month he began his new job with Cadillac Products Automotive Company, where he continued his legacy as a premier problem solver, designer and builder of automation machinery to enhance productivity. Kyle loved working at CPAC, where he felt blessed to work for a family-owned company that provides employees the ability to achieve and create their own path within the organization.

Kyle's humble nature would lead you to believe that none of these accomplishments ever happened. No matter how hectic his schedule was or what hobby he was working on, Kyle always found time to lend a helping hand to others. We talk about his achievements on paper, but it is what he gave to us with his spirit and love that will forever remain in our hearts.

Erin Krause: "There is a saying -- you don't know what you have until it is gone. Well, I'm here, with all of you, saying that we all knew what we had the whole time. It's the kind of life he lived where you just knew by the way he carried himself that only greatness was possible."

There will be a private service on Monday, March 29, with a Celebration of Life In July for family and friends. Condolences can be offered through the funeral home website at: modetzfuneralhomes.com/obituaries/Kyle-Edward-Krause?obId=20443823. Also, a GoFundMe page has been established to help the family during this untimely and very tender time: https://gofund.me/bbf84079.