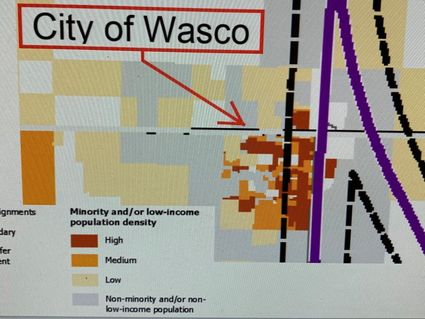 A map of the originally proposed High Speed Rail in relation to the City of Wasco's population density. The purple line is the HSR track and the black lines are the previously proposed alternate routes for consideration.

The High Speed Rail Authority continues to be an ongoing problem for the city.

"The reality is, Wasco was a small fish and was ignored," City Manager Daniel Ortiz-Hernandez said. "The city opposed it every step of the way."

Ortiz-Hernandez gave a presentation to the City Council from the city's perspective of the problems associated with the HSR Authority. A map of the originally proposed railroad track alongside the alternative HSR tracks was enclosed in the April 6 City Council meeting packet.

Ortiz-Hernandez explained at the time the state voted to approve the HSR in 2008, the HSR Authority was unable to provide a completed set of design plans when the project was presented to the voters and continues to add and change the project as it moves along the Central Valley corridor.

In 2011, the City of Wasco passed Resolution #2796, supporting the development of the HSR alignment along the east side of the existing rail alignment because it would have less of an impact on the community.

In 2012, Resolution #2836 opposed the HSR project as its proposed alignment went through the city and would have negative impacts to the community because the proposed alignments would damage "significant amounts of local residences, businesses, historical structures, culturally significant structures, open spaces and other basic critical infrastructure."

In 2015, the City Council passed Resolution #3073 opposing the HSR project as proposed and requested less-damaging alternatives.

The Amtrak station, which was built in 2006, is considered one of the major Amtrak lines in California - Capitol Corridor, San Juaquin and Surf liner are among three of the five busiest. Once the HSR begins service, Amtrak will no longer stop in Wasco and riders will have to travel to Bakersfield to catch the train.

Also, the state has said that it cannot fund two rail services once the HSR goes online. Therefore the Amtrak station was demolished.

"It only took one day for the HSR to demolish the Amtrak station," Ortiz-Hernandez said.

Relocating the former farm labor housing residents was in lieu of building a concrete sound wall, which would have created noise as well as loud vibrations, Ortiz-Hernandez explained.

The EIR/EIS states within the mitigation document that the identified affordable housing development located east of the rail lines on J and 6th Street was an environmental justice community requiring mitigation.

The proposed mitigation was the Wasco Farm Labor Farmworkers Housing Relocation Project, which will build and relocate the community at that time.

The Wasco Farmworker Housing Development project was underway before the HSR project began. The original design included a sound wall between the housing complex and the freight train. In 2018, the HSR provided $10 million for the new housing project that was completed in 2019.

In May 2016, former Mayor Cheryl Wegman and former City Manager Paul Paris addressed the HSR Board of Directors regarding the proposed mitigation agreement. 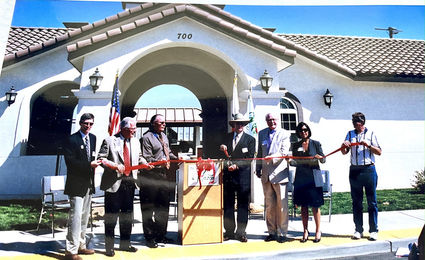 "The HSR is a detriment to our community," Ortiz-Hernandez said. "The HSR was considering two different paths. Wasco is directly in the path of the HSR. The HSR knew which path it was going to take and could have chosen to bypass Wasco. When the plan was proposed to the City Council back then, the City Council was opposed to the project."

The council members were in agreement about the HSR not living up to its policy statement of no negative impact on any community where the HSR was being constructed. The council members also agreed that the HSR should pay for the demolition of the former farm labor housing.

In addition to the issues raised in Wasco, city officials in Tehachapi are raising concerns such as the track running through the city without making a stop.

The HSR officials stated that the City of Tehachapi complaints were presented in writing to the HSR last spring.

"The Authority is working on these matters on mitigation measures as part of the environmental process," California Regional Director LaDonna DiCamillo said. "The HSR is reviewing Tehachapi's concerns and are hopeful a solution can be reached."