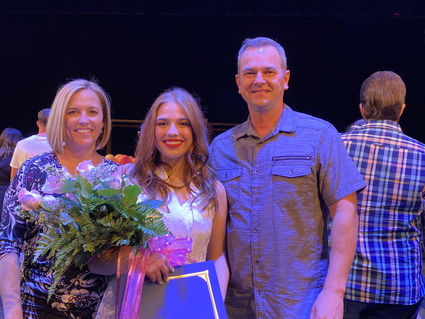 Nicole Morris poses with her parents, Chad and Janae Morris.

Nicole Morris was named Shafter's Distinguished Young Woman for the Class of 2022 on Saturday night.

The event was held at the Ford Theater and the event was Livestreamed for those who were unable to attend. Emceed by Debbie Porwell, last year's Distinguished Young Woman Shelbee Ramos handed her title to Morris at the end of the evening.

The program has several different phases that are judged, including Physical Fitness, Self Expression, Scholastic, Interview, Talent and the Spirit Award, which is voted on by the participants themselves.

At the end of the evening, Morris's named was called, despite not winning any of the individual categories. Morris's overall score was higher, with a strong all-around performance.

The First Alternate was Natalie Olvera. Olvera also won the Scholastic award, Spirit award, and the Self Expression award.

Along with the title of Distinguished Young Woman of Shafter is a $2,000 scholarship to go toward Morris's education. Morris, who was sponsored by the Shafter Ford Theater, is planning on attending Abilene Christian University and is looking for a career in theater, psychology, or interior design.

All of the contestants were interviewed before the evening's program, giving the judges a glimpse into the personalities of the participants, evaluating how they handle speaking under pressure, and what their beliefs and priorities are.

The Fitness category, which tested the participants' endurance, fitness, and overall health was won by Malia Maldonado. 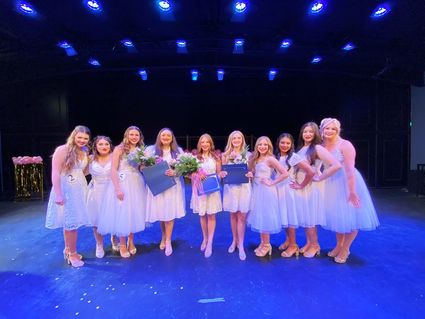 Shafter's Distinguished Young Woman program is one of the oldest and largest programs in the state. Porwell said one of the main reasons for this success is the "amazing support that the community of Shafter has shown since the program's inception. We are extremely fortunate to have such wonderful people in this community."

Morris will now represent the city in the state competition, which will be held this summer in Bakersfield, as well as making public appearances at different city functions, such as ribbon cuttings and luncheons.

Morris is the daughter of Chad and Janae Morris.