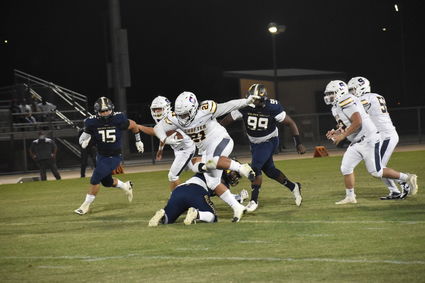 The Shafter High Generals football team ended their abbreviated season with one of the only three undefeated records in the county, going 5-0.

Their final game was on Friday night, winning against one of the other four undefeated teams, the Golden Valley Bulldogs, 41-14.

The Bulldogs tested the Generals' defense, with an early score that pulled the Bulldogs within 7-6 early in the game. Shafter came out and scored on their first drive of the game, which they had done in three of their four games to date this season. This drive ended with a 10 yard keeper by quarterback Tyson Dozier. Golden Valley answered with a score of their own, but they attempted a two-point conversion that Shafter stopped.

The Bulldogs would get no closer after that. Dozier and the team took another two drives in the first half for scores, using a ball control offense that included runs by Walker Murphy and Dozier. 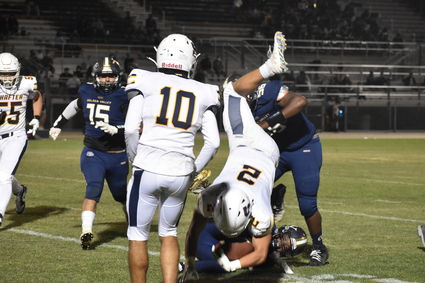 Elisha Lucero gets a first down for the Generals.

The Bulldogs hung tough for the first half, keeping the game within reach more than any other Generals' opponent this season. The Generals started pulling away with a tough-nosed defense and an offense that ate up chunks of the clock and finishing with a score.

Dozier used a variety of receivers in these drives, spreading the ball around to Cameron Huerta, Devon Sundgren and Nick Aguirre, while getting yards and first downs from Murphy and Elisha Lucero on the ground.

After Dozier scored again with six minutes to go in the game, the score was 34-14. A late score by the Generals gave them a final score of 41-14.

Although the Generals were flagged for 14 penalties in the second half compared to Golden Valley's three penalties, the Generals overcame.

With a strong Junior Varsity squad, paired with several key returners, including Dozier, Murphy, and several others on both sides of the ball, the Generals are prepared for their 2022 season.