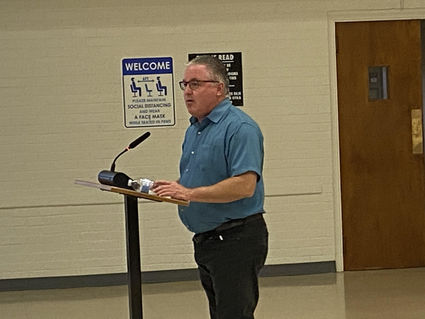 Terry Knight, of the Kern Vector Control, gave a presentation to the City Council.

Residents of Kern County have enjoyed the luxury of being able to lounge in their back yards, or on their porches, without being swarmed by mosquitoes. With the invasion of a new species of mosquito, this luxury is a thing of the past.

Anyone who has ventured outside has probably encountered this new culprit, the Aedes Aegypti. This mosquito separates itself from the more common Culex Tarsalis by the way it attacks and the environment in which it enjoys to feed.

Terry Knight, public information director for the Kern Mosquito and Vector Control, is telling Kern County residents that this new pest's reign of terror is growing and this upcoming mosquito season could be a bigger one than last year if left undeterred. Knight gave a presentation recently at the Shafter City Council meeting to advise them about this new threat.

While the Culex feeds mostly at night and dusk, the Aedes Aegypti, or "ankle biter," likes to attack during the day. This new species got its nickname by the fact that it bites humans below the knee, preferring to bite its victims around the ankles and also behind the knee.

According to Knight, it is very aggressive and does not stop after one bite.

"The Culex normally bites you once and feeds. This new pest will bite you several times, repeatedly to obtain its blood meal," he said.

Knight said that for the past two years, the numbers of this mosquito have grown significantly. "We received around 40 calls two years ago about this particular pest. This last year, that number grew by 100 times," added Knight.

While the Culex can carry the West Nile virus, the Aedes Aegypti does not carry that virus. It can carry the Yellow Fever virus, but in Kern County this is not a threat. 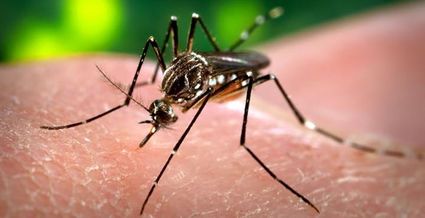 The Aedes Aegypti is small, very aggressive and will bite its victims behind and below the knee.

Another difference in the two species is that the Culex mosquito likes to lay its eggs in and around large bodies of water, such as lakes and pools. The Aedes Aegypti can lay its eggs in a bottle cap of water. They also like to dwell in planters, in saucers, in boxes where sprinkler boxes are located and anywhere that can hold a small amount of water for a few days.

There are ways to protect yourself and your family from this pest.

"Homeowners can do their part in trying to eradicate this pest by policing their homes and yards regularly," Knight said.

Knight said do not use pots that have the saucers underneath them. If you do use those types of planters, he said to clean the pots regularly and keep any excess water away from them.

"To clean the pots, you need to scrub the pots and saucers with bleach to kill the eggs. You also need to make sure to dry them well, leaving no water residue."