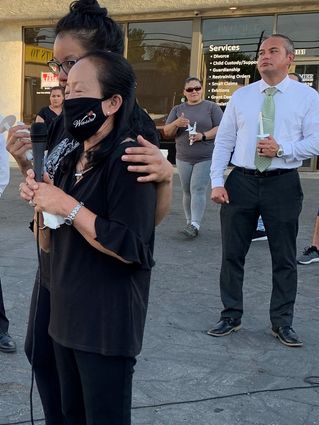 A Wasco family held a candlelight vigil to honor their recently deceased father on May 12.

On Friday, April 30, Wasco Donuts to Go owner Lon Mam, 64, was driving to Hanford to visit an uncle. A 29-year-old unidentified man driver from Tulare sped into Mam's lane and the vehicles collided. Both drivers died at the scene.

The Mam family set up a GoFundMe to help toward the cost of funeral expenses and they organized a candlelight vigil to honor their father by inviting the community.

The funeral was held Saturday at Alma Funeral Home in Bakersfield.

For the candlelight vigil, Mayor Alex Garcia assisted in the coordination of the evening with the family.

Garcia welcomed attendees to the vigil and praised Mam's family for being a positive and integral part of the Wasco family-oriented culture and said the community would always be available for them.

Cortez stated that he was surprised Donuts to Go only opened in Wasco in 1991 because he felt as if it had always been there and Mam was always the owner of the donut shop.

Mam's oldest daughter, Melinda Mam, told the attendees at the vigil that another owner had the original donut shop and named it Donuts to Go. The Mam family decided to keep the name and continue the business when they purchased it in 1991.

"It's so touching to see so many family friends here at the vigil," Melinda Mam said. "Dad would have been so happy for us."

Lon Mam was born in Takeo, Cambodia. He immigrated to Texas in the 1980s and worked in construction. Lon and his wife, Kim Mam, met at a camp in Thailand when they were younger.

The Mam daughters spoke lovingly of both their parents. Their parents were born in Cambodia and life was very rough for them. Cambodia, being so close to Vietnam, was embroiled in the North and South Vietnam conflict that started in 1961.

The girls explained that their dad would share with them how hard life had been for he and his wife as kids while they were living in Cambodia. 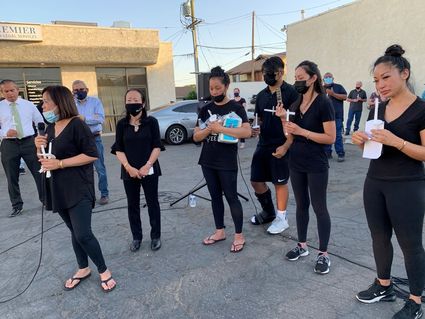 During the time that the couple lived in Cambodia as youngsters, it was ruled by the Khumer Rouge soldiers, which was a regime that ruled Cambodia. The leader Pol Pot from 1975-79 attempted to make a "master race," thereby, creating a genocide that executed (often with pickaxes, to save bullets) Cambodians and buried them in mass graves. This is what life was like for Lon Mam and his wife when they lived there.

"My mother saw her brother killed in front of her in Cambodia," Melinda Mam said.

The Mam's moved to Fresno where he worked in a donut shop. While looking for a place to open up his own business, they discovered Donuts to Go was for sale in Wasco, so they bought it and have become a part of the Wasco community.

Lon Mam's daughters talked about his kindness, guidance and the good example he set for everyone.

Lon Mam leaves behind his wife, three daughters and two grandsons, Christian and Irvin, and many family members such as cousins, aunts and uncles and local friends who have gotten to know him over the years.

It is unknown if Donuts to Go will remain open as the family has yet to make a decision.