Children learn about The Good Kingdom during Vacation Bible School 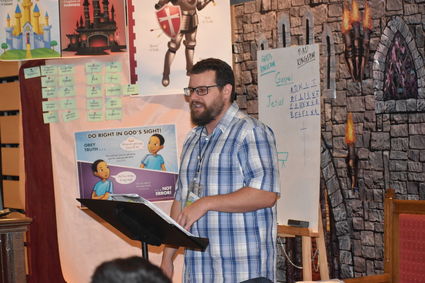 Bible lessons was one of the stations throughout the day.

At Shafter's Ford Theater this past week, a group of children were learning about how to suit up and go to battle at the Annual Community Vacation Bible School.

Multiple churches in Shafter came together to form one Vacation Bible School.

This year's theme was "The Kingdom Chronicles," where the kids were taught about two different kingdoms, The Good Kingdom and the Bad Kingdom. Cris Starrh, along with a number of volunteers from several local churches, kept the kids busy and engaged.

Included in the activities was the crafts session, where the kids made belts, crowns, and other items that helped them learn the message of the VBS, that our Lord is mightier and rules the Good Kingdom.

The children were also treated to snacks and drinks, as well as participating in activities such as a word search, playing board games and dancing.

The music portion of the program was very popular with the kids, allowing them to work off some energy with singing and dancing.

A special guest spoke at one of the VBS sessions on Tuesday. Debbie Williams, of Under His Umbrella, spoke about what is being done with the money being raised throughout the week. Money collected during the week went to Under His Umbrella, a nonprofit organization that helps children in Rwanda go to school. 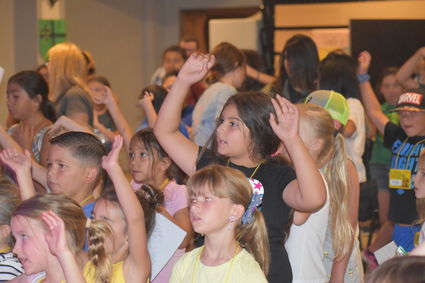 VBS kids had a blast dancing and singing to the songs.

Williams told the children, "We can buy a happy meal at McDonalds here in Shafter for around $5, but in Rwanda, we can feed 10 children for that five dollars. You guys are doing a great job in helping so many children who are so poor that they can't go to school and oftentimes no even have enough to eat."

As of Tuesday, they had raised around $90 for the organization, which Williams said, would pay for 180 meals for the children in Rwanda.

Pastor Pat Coyle, of the Shafter Mennonite Brethren Church, told the kids how important it was to be a soldier in the Good Kingdom and wear that suit of armor of faith that will protect them from whatever the devil throws at them.

Seventy-eight children have attended the Vacation Bible School this year, with participants ranging from kindergarten to sixth grade.