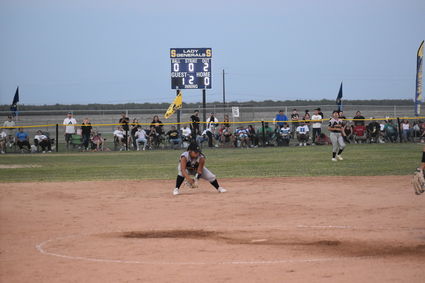 Ariana Escalera grabs a grounder and tosses to first for an out.

The Valley Championship title slipped away from the Shafter High Lady Generals during the final game, losing 9-0 to the Highland Scots.

Shafter's softball team had only one loss in the season before the title game when they lost 5-1 to Golden Valley in the middle of the season. Overall, the Lady Generals had a 14-2 record and outscored their opponents by a total of 156-45.

Serenity Angulo, who pitched a five hitter in the semifinal win over Bakersfield Christian with 10 strike outs, was hit from the start of the game against Highland. Scots batters repeatedly found the gaps as they pounded out 11 hits in the first three innings of the game.

After Highland began the game with a run in the first inning, Shafter got a couple of hits and tried to tie the score with two outs in the inning, but the Shafter base runner was thrown out at the plate for the third out. The Lady Generals would not get another base runner in the game until the sixth inning. 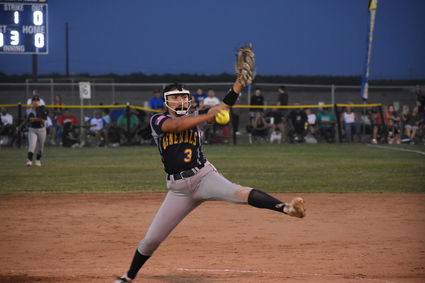 Highland pitcher Briana Solis dominated the Shafter batters, with the Lady Generals only managing some pop outs, and balls that were hit right at the Scot fielders. Highland scored six runs in the third inning, but Shafter coaches elected to keep Angulo in the game until the sixth inning, with the score 7-0.

Nataly Espinoza came in to relieve Angulo and kept the Scots off the base paths for the majority of her stint.

Shafter had one of their hits in the seventh inning, with Angulo hitting a ground rule double to get the Lady Generals just their second base runner since the first inning. But, Shafter was unable to get a run across the plate, ending the game with a fly out, giving the title to the Scots.