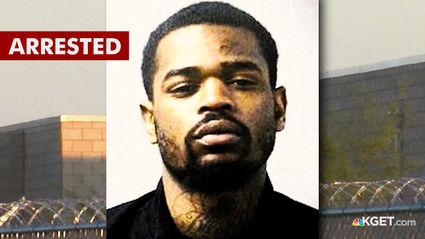 Tyrone Johnson was captured after a pursuit.

Tyrone Johnson, a Lerdo Justice Facility inmate who escaped in April, was apprehended by Bakersfield Police after a short pursuit.

Johnson, along with David Palms, escaped from Lerdo on April 28. Palms was captured hours after the escape after a foot pursuit. He was taken into custody by Shafter police officers outside of Dollar General.

The inmates were believed to have walked into Shafter after the escape, with residents calling in tips of sightings of both suspects. At one point, several sheriff's office vehicles were parked at a neighborhood on West Ash in Shafter, but Johnson was not located. Police said Johnson may have had help in his escape.

Johnson managed to elude officers for almost two months, despite a large search operation that was coordinated between different law enforcement agencies.

On Monday night, Bakersfield police officers attempted to stop a vehicle for an infraction, but the driver of the vehicle, later found to be Johnson, didn't stop and led officers on a short pursuit. Johnson eventually crashed into a parked vehicle on River Boulevard and Bernhardstrasse. Johnson then ran away from the scene before being caught by officers a short time later, police reported.

Johnson will be facing 16 new felony criminal offenses in connection with the escape and police pursuit.

Johnson was originally arrested and put in Lerdo in 2017 for charges stemming from the murder of 3-year-old Major Sutton in Bakersfield.

Johnson and Palms were scheduled to appear in court to face those charges when they made their escape.