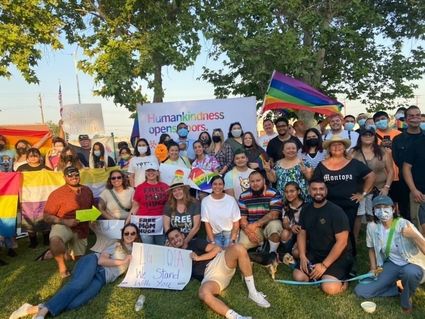 Supporters for raising the Pride flag gathered outside city council chambers on Tuesday before the City Council meeting.

Before the City Council denied a motion to raise the Pride flag in the month of June, a group of supporters rallied in front of City Hall.

About 50 people of all ages turned out to show their support of raising the Pride flag.

"I was amazed at how many students I saw supporting the idea," Garcia said. "There were a lot of high school students, who will be voting or close to voting within the next year or two."

Garcia said he envisions a time when the Pride flag will be accepted by all.

"Despite the discouraging vote and remarks at the last regular council meeting, we must press on fighting for progress in the Central Valley," Garcia said Wednesday. "I'm happy to help lead the charge in our corner of Kern. Rural LGBT residents in Wasco and beyond will remember this vote – I am proud to have stood on the right side of history."