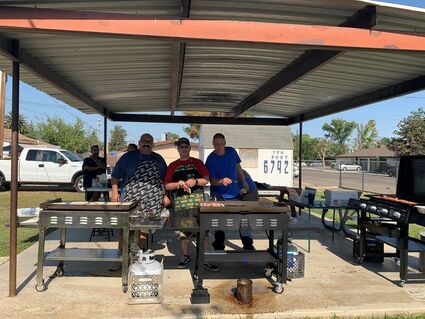 The VFW Post 6742 on E Street held the first pick-up pancake breakfast in over a year since the pandemic began on Saturday, June 19.

Pancakes, bacon and scrambled eggs along with orange juice were individually bagged for each recipient.

For $7 a plate, the pancakes were light and fluffy and the thick bacon slices took away the urge to gobble everything down rapidly as diners savored every bite. Manning the hot griddles were Lionel Lopez, Mathew Johnson and Mark Miller from Shafter.

Elks' member John Geisy was front and center helping the Wasco/Shafter VFW crew and he also brought along a number of bottles of hand sanitizer for everyone.

Missing from the festivities was former Commander Danny Rueda, who is currently being hospitalized facing a medical situation.

"Danny is the strongest person I know," former Commander James Medrano said. "He is a true patriot and the backbone of the VFW. We missed him."

One of the attendees at the breakfast was veteran Donald Johnson, who served in Vietnam. Johnson was recognized for providing his unit the direction to conduct business in a timely manner and with professionalism.

"Most of the young guys coming over to Nam were scared to death," Johnson said. "They were afraid they were all going to die."

When Johnson went into the military he told himself he would do the best job he could. When he was in charge of ordering supplies, they would arrive much quicker than other units.

"It took me 53 years to get my Bronze Star," Johnson said. "For some reason, the paperwork kept getting held up. But, it finally arrived this 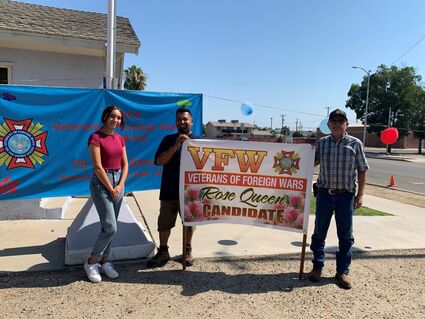 The Bronze Star Medal is awarded to any person who, while serving in any capacity in or with the military of the United States after Dec. 6, 1941, distinguished himself or herself by heroic or meritorious achievement or service, not involving participation in aerial flight, while engaged in an action against an enemy of the United States; while engaged in military operations involving conflict with an opposing foreign force; or while serving with friendly foreign forces engaged in an armed conflict against an opposing armed force in which the United States is not a belligerent party.

Awards may be made for acts of heroism, performed under circumstances described above, which are of lesser degree than required for the award of the Silver Star.

Awards may be made to recognize single acts of merit or meritorious service. The required achievement or service while of lesser degree than that required for the award of the Legion of Merit must nevertheless have been meritorious and accomplished with distinction.

Joining everyone for breakfast was Assembly member Rudy Salas.

Beginning July 1, Camilo Vasquez will be taking the reigns as Commander of VFW 6742.