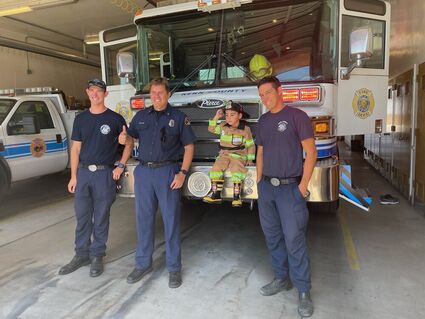 The Shafter Substation played host to Elardio Garcia and his mother and great- grandmother.

Elardio Garcia has always loved firefighters. He loves the fire trucks, the uniforms and the people that save others by their bravery.

Garcia had a dream to meet his heroes and see where they do that important job. Garcia's great-grandmother, Bule Rea, contacted the Shafter substation of the Kern County Fire Department to see if they could make his dream come true.

Rea said, "We made an appointment and they said that as long as there was not an emergency, they would be happy to show Elardio around the station."

Bule said that Elardio, who is 5 years old, was diagnosed with autism.

Rea said school officials recommended they enroll Elardio in a special needs school or program, but they decided to enroll him in a regular public school.

"We decided that we wanted to raise him and treat him as normally as we can. If he attends a regular school then he will have a chance to have as normal life as possible," Rea said. "He is doing really well in school and has made friends and made great progress."

Rea said the Saturday in July came and they took Elardio to the fire department in Shafter. The firefighters there let him sit in the fire truck and hear the sirens.

"He loves hearing the sirens. He gets excited whenever he hears them and he will look around for the trucks," Rea said.

Garcia was dressed up in his firefighter costume that he wears every year.

"He loves that costume and wears it a lot," Rea said. 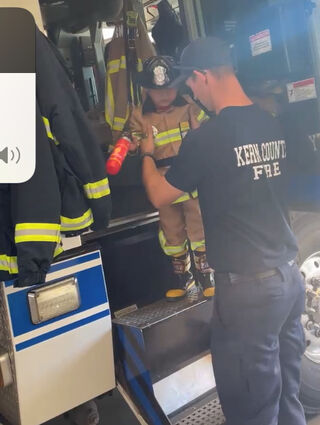 Elardio had a chance to tour the big fire truck.

Garcia received a tour of the fire house and also the emergency response vehicles, including the big fire truck and the smaller vehicle. They showed him the equipment they use, including hoses, ladders and life-saving equipment.

Rea said she wants to thank all of the guys at the station who took time out of their busy schedules to make his dream come true.

"I know they have an important job and are very busy. I think that it is so special for them to take time out to brighten a child's world," Rea said.

In addition to firefighting, Garcia is enthusiastic about horses and took part in the Cinco de Mayo parade two years ago, riding on top of a horse, along with his family.