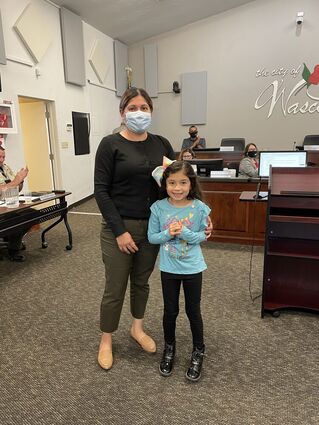 City employee Claudia Garcia with daughter Sophia Garcia, who led everyone in the Pledge of Allegiance.

Sgt. Peter Martinez told the City Council that Oct. 22 will be his last day as sergeant at the Kern County Sheriff's Office Wasco Substation.

"I have really enjoyed the past four years in Wasco," Martinez said. "I learned a lot from the city council and the community."

"I got to know so many members of the community," he said. "Everywhere I went, I would run into someone I knew. That's what I love about small towns."

"Nice is not a word that does the city justice," Martinez said. "There is no word to amply describe how I feel about everyone in the city."

Martinez will continue with the Kern County Sheriff's Office but will be relocating to covering the eastern part of Kern County, such as Tehachapi, Boron and Rosamond.

Senior Deputy Charles Shinn will be taking over the Wasco station. 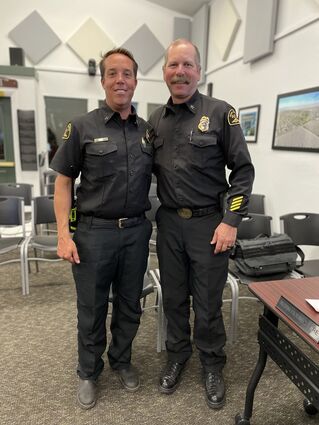 "Deputy Shinn has two years' experience at the Wasco substation and he is not new with the profession. Shinn has been promoted to Supervising Sergeant, which becomes effective Saturday, Oct. 23.

In an earlier meeting with City Manager Scott Hurlbert, several ongoing items in the city were discussed. One large item was the High Speed Rail where Hurlbert said the city is looking forward to the HSR completing its work.

Hurlbert also said that the city is looking to begin working on Well #13, which was lost when the HSR needed the land the well was on.

"The HSR will be replacing the well and putting a new well in a new location," Hurlbert said. "The new well will be east of Wasco Avenue and south of Poso." Hurlbert also added that the property is already marked and construction should start very soon.