By Jamie Stewart
The Shafter Prees 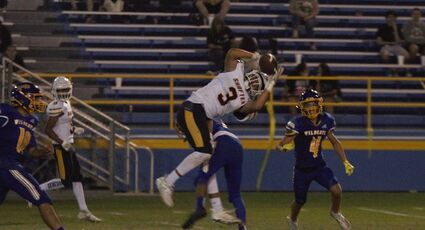 A touchdown for the Generals.

The Shafter High Generals football team is undefeated in SSL play, dominating their opponents for the most part. It hasn't always been pretty, but the Generals have found ways to win every SSL contest.

The Generals' offense has been under the leadership of Darren Sundgren since Week 3, when Tyson Dozhier went down with a broken collarbone. Sundgren has given the Generals a good mix of quick feet and a steady hand, helping lead the Generals to victories. Sundgren has gained some great yardage on the ground, as well as completing some key passes when asked to do so in a pinch.

A real highlight for the Generals has been the play of the defense the past few weeks. They have gotten better every week and have only given up seven points in the last two games. They shutout the McFarland Cougars, and was just a couple of miscues in the backfield from pitching another shutout against the Arvin Bears, winning the game 47-7.

Coach Jerald Pierucci said that he is proud of this team for persevering through a lot of challenges this year, finding ways to win. 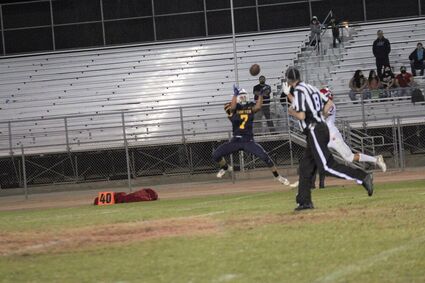 Aguirre goes up for a reception.

"So far this season, it has been up and down," Pierucci said. "But the kids have battled through seeing contributors quitting, injuries, young players learning the game, and the usual day to day adversity that all high school kids go through."

Pierucci also said that it would have been easy for them just to pack it in, but they have found ways to win games.

"Sometimes it was ugly, but ultimately, they found ways," he said.

Moving forward, Pierucci said they have a great opportunity to continue their four-year run of SSL championships. The Generals will face their toughest SSL competition to date in the next two weeks. Shafter plays Kennedy on Friday night, with Wasco looming on Oct. 29.

"Our next two opponents are by far the top end of the league, but that is how it should be," he said. "This year's team is still not playing its best football, so we need to continue to get better and improve."