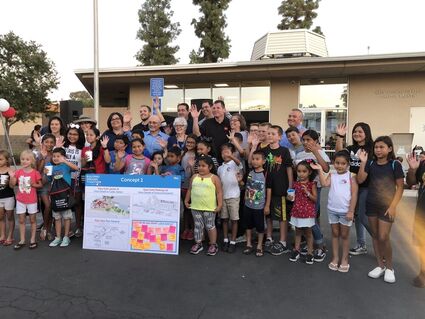 Noel Abraham, of GAF Materials, center, is surrounded by the community they are helping to reach their dreams.

The Shafter Chamber of Commerce will be holding their annual Awards Banquet and State of the City address on Thursday, Jan. 27 at the Shafter Ford Theater, at 5:30 p.m.

The event starts with an hor d'oeuvres hour, followed by dinner, and then the presentation of the awards. There will also be a State of the City address given by Mayor Cathy Prout.

The winners of the 2022 awards banquet have been announced.

Peters Funeral Home is receiving the Architecture Contributing to Business Revitalization Award, rewarding them for the revitalization that took place at the site.

The Arts Group Award is going to Alondra Montavo, Sierra Albiar, Khloe Verdugo, Senyia Schluter and Brinlee Swann. These girls had a dream of a mural that would beautify the wall across from the Shafter Learning Center. After contributing ideas for the project to the City Council, the project was approved and an artist was approved. The girls were a part of the project every step of the way, including helping the artist as she painted the mural.

GAF Corporation is receiving the Business Award. GAF has been an integral part of the Shafter economy, as well as its youth and residents. They are a major part of the renovation of the Shafter Learning Center project that is going to improve the site, giving the public more options when it comes to learning. 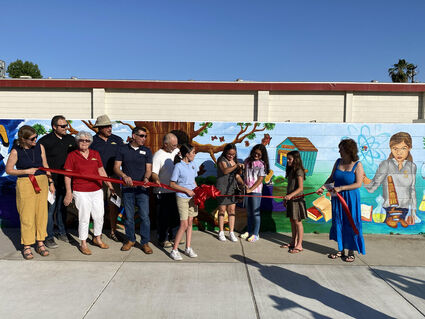 The girls at the ribbon cutting ceremony for the mural they had a part in creating. They will be receiving the Arts Group Award.

Katie Wiebe will be awarded the Citizen of the Year award. Wiebe has been a major part of several projects in the community, including the mural across from the Shafter Learning Center, as well as the community's effort to save the local library. Wiebe and Melissa Bergen created the Listen to Shafter network.

Other winners that will be honored at the banquet are Lorena Ayon, who is receiving the Community Service Award, Lynnda Martin, the winner of the Community Service- Business Award, Bakersfield College for the Education Award, Craig Haley as the Humanitarian of the Year, Tin Cup Coffee for the Special "Recycle" award, Juan Zavala for the Youth Development award, and Yahir Dimas, who will receive the Young Person award.

Tickets may be purchased at the Chamber Office. For more information, call the Chamber office at 661-746-2600.