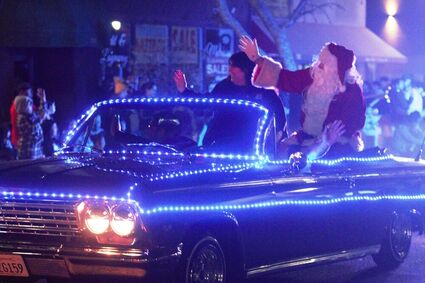 Santa Claus made an appearance.

The Shafter Lions Club annual Christmas Parade made its return on Friday night, after a hiatus because of the health and safety restrictions in place last year.

Gilbert Alvarado and the Lions members organized the event. The evening was filled with lights, music, and an array of entries that dazzled the crowd.

The Richland Junior High Trojan Band provided a musical number including a performance from their Drill and Flag team, as well as the musicians marching through downtown. 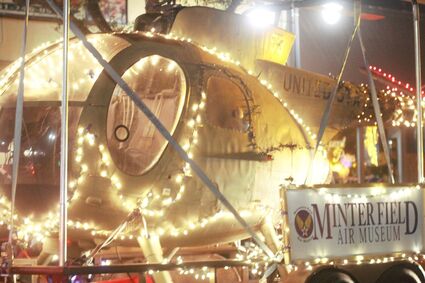 The Minter Field Air Museum had their LOACH helicopter on display.

The parade had more than 40 entries, with a variety of floats, vehicles, and groups celebrating the holiday season. No Christmas Parade would be complete without Santa, who made an entrance on a classic car, waving to the crowd.

Adding to the festivities was the appearance of the Shafter High Generals football team, who had concluded a successful season that included a run to the quarterfinals of the Central Section Division V playoffs. Several seniors from Carrington House in Shafter braved the cold weather and delighted the crowd as they made their way down the parade route, waving to all of the spectators.

The parade followed a well-attended Christmas Tree Lighting and Sing that took place the night before on Thursday night. Local groups sang traditional Christmas carols as the downtown tree was lit for the holiday season. The GROW Academy's Choir entertained the crowd and Shafter's Distinguished Young Woman Nicole Morris had the honor of lighting the tree.