By Jamie Stewart
The Shafter Press and Wasco Tribune 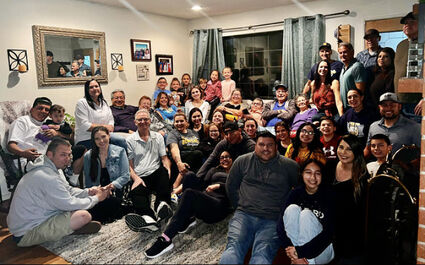 Longino Gonzalez and his family at his 90th birthday celebration.

Longino "Kino" Gonzales recently celebrated his 90th birthday, surrounded by family and friends, reminiscing about a life that has been filled with love, laughs, and plenty of great memories.

Anyone who lived in Shafter during 1965 and 1990 remembers Kino as he delivered mail to residents all over town, with a smile on his face and a quick wit that rivaled none. That wit is still sharp today, along with a memory that allows him to recall names and addresses from almost anyone who was on his route.

Gonzales recently visited the Shafter Press office for a chat with Editor Jamie Stewart. Stewart lived on West Orange after getting married back in 1989. Gonzales remembered him and also remembered about him attending Shafter High with one of his daughters.

Kino didn't intend on making the Post Office a career growing up. He was already 45 years old, working jobs in the farming industry when he was asked if he had ever thought about working for the Post Office. He ended up taking a test, passed it, and the rest is history.

Gonzales said that the most enjoyable part of his years with the Post Office was the people along his different routes.

"I loved meeting people, getting to know them, and even having relationships with their children and grandchildren," said Gonzales.

Gonzales was born in Queens Creek, Arizona, moving around the western states with his grandfather before settling in Wasco.

Gonzales has five children, who gave them 10 grandchildren, with those giving him 26 great-grandchildren. Gonzales cherishes the time he gets to spend with family, and also remembers fondly the many trips that they took as a family, be it to a theme park during the summer or a camping trip to Morro Bay.

One of Gonzales's daughters, Andrea Hernandez, said that she remembers summer trips to Disneyland, Magic Mountain, and Sea World. Each time they visited a different place, he would put up a banner from the destination and would hang it in their den. Whenever one of their friends would come over, they would ask them, looking at the different banners, "You guys went there?"

"It was a great conversation starter," said Hernandez.

Another memory that Hernandez had was the tradition of Gonzales reciting the "Our Father Prayer" alongside her bed at bedtime.

"He always made me feel safe," she said.

Pete Gonzales, Kino Gonzales' son, also had fond memories of growing up with such a special man.

"I will never forget him taking us to so many great places, like the time we got to see the Grand Canyon and the snow at the same time," Pete Gonzales said.

Gonzales said that he has lived a good life so far, with its ups as well as some downs.

"But, overall, I have loved my life and the people that I have been able to call my friends," he said.

He said that the small town feel to Shafter and Wasco have been the most important thing about living here. 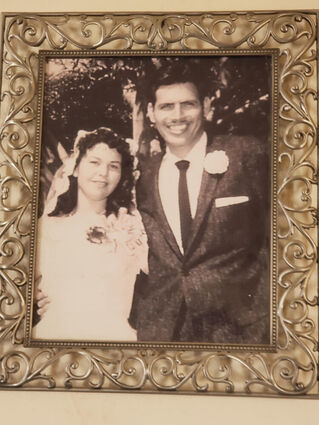 Longino Gonzalez and Margie on their wedding day.

"You know everyone, and we all looked out for each other, helping whoever needed it, no matter what was going on in your own life, that willingness to touch someone else's life," he said.

As evidence of Gonzales's memory, the Shafter Press publisher, Michael Schroeder was in town visiting. When he walked in the office and told Gonzales that he grew up on Pine Street, Gonzales said, "Yep, 230 Pine to be exact," remembering the address from over 45 years ago.

Gonzales rattled off different customers he had throughout the years, reciting their addresses like he delivered there yesterday.

Talking to Gonzales is like talking to an encyclopedia of the city of Shafter. But, when the day is done, the most important part of Gonzales's life has been his amazing family.

"My wife and kids have been the best gifts I have ever received, giving me so much joy through the years," he said.